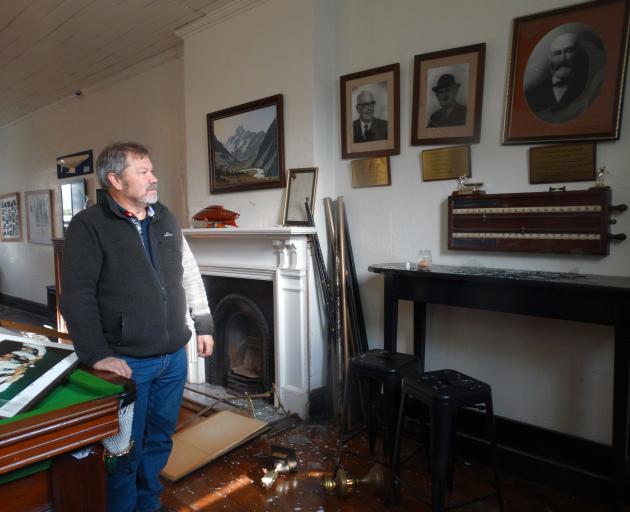 The Terraces Art Gallery owner Kevin Murdoch in June last year, after his building was broken into and vandalised. PHOTO: ODT FILES
A spree of destruction which ended with an Oamaru man headbutting a police officer has earned him more than two years in jail.

Henare Lance John Te Paea (28) was sentenced in the Oamaru District Court on Wednesday to 27 months and two weeks’ prison, on three charges of wilful damage, four of burglary, and one of assaulting a police officer, stemming from two different incidents.

On June 25 last year, the defendant had been drinking all day with friends.

About 7.30pm, he smashed his way into The Terraces Art Gallery in Wansbeck St, through a glass door with his fists, cutting himself.

He went upstairs, found a pool cue and caused extensive damage to the property smashing paintings, pictures, windows and memorabilia dating back to 1906.

On November 19, while on bail for the first offence, Te Paea was again drunk and in the alleyway beside Hope and Associates law firm in Thames St. He kicked in a window to the premises and let himself in. He pushed over furniture and computer equipment, threw chairs and spread shredded paper everywhere.

He found a minibar in one of the offices, and took chocolate and an amount of money from an honesty box. He smashed an internal glass door before heading out on to Thames St, taking a computer monitor from the reception area with him.

He walked to the nearby Waitaki Museum and threw the monitor at a window, destroying both the window and the monitor. He carried on walking towards Itchen St, picking up a road cone as he went.

He used the cone to break a window at the Oamaru Repertory Theatre and then windows at the Star and Garter restaurant, where he let himself inside and helped himself to alcohol from the fridge. He threw the road cone through another window to make his exit.

Next, Te Paea went to Harbour St, and using a pot from a nearby business, broke a window at the Grainstore Gallery, before heading to what was then Adventure Books and repeatedly kicking a wooden sally door, to gain entry.

A member of the public called police, who found him inside the book shop, unco-operative and abusive.

The defendant was handcuffed and placed in the back of the police car, and while being transported, he became more aggressive and headbutted the officer sitting beside him in the car.

The officer suffered a bruised lip as a result of the assault, but did not require medical attention.

In his victim impact statement the owner of Wansbeck St gallery said that he had worked hard for three years restoring the building, and was "particularly upset" when he saw his gallery after the break-in and found it in chaos.

Judge Ian Mill told the court Te Paea’s crimes "certainly weren’t sophisticated", but the over-riding factor was the way he went about the burglaries, and the number of them.

Restorative justice meetings were held with Te Paea and two of his victims. His apologies were accepted.

He also wrote a letter of apology to the officer he assaulted.

The judge set a starting point of 35 months’ jail for all the offending, and gave a 30% discount for the defendant’s early guilty plea, taking part in restorative justice, and his remorse. He added another three months, because the second incident had occurred while the defendant was on bail.