Farmers need 'to help each other' 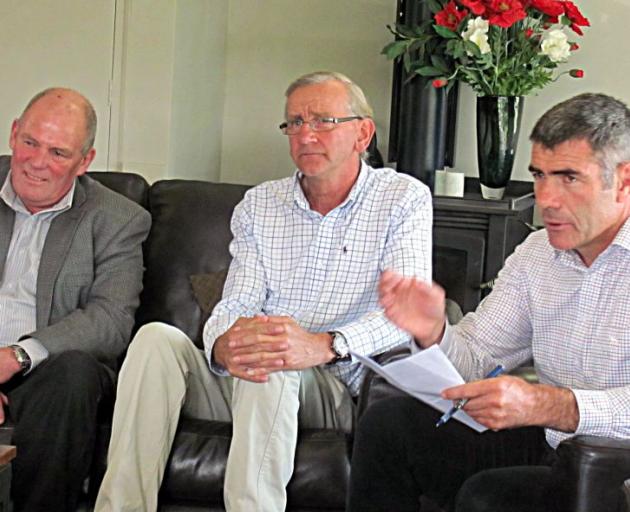 Minister for Primary Industries Nathan Guy (right) talks with farmers during a fact-finding visit to Mid Canterbury recently. At left is Ashburton Mayor Angus McKay with Tom Lambie, from South Canterbury. Photo by Maureen Bishop
There is no move yet in Mid Canterbury to seek declaration of a drought.

Federated Farmers provincial president Willy Leferink said while things were getting serious, with no rain and with irrigation restrictions and wells collapsing, no application had been made to the Government to declare a drought.

''What we need is to help each other. If you have a problem, talk to others, as they might be able to find a solution,'' Mr Leferink said.

Dairy farmers were not half as worried about lower payouts as they were about not be able to feed their cows, he said.

''We're not in that position yet and most people are managing.''

There was a lot more culling of unproductive cows but North Island meat-processing plants were full.

Winter crops were at risk but one benefit of the total fire ban was that wheat straw would be baled rather than burnt, he said.

But less experienced sharemilkers new to the province did not have an understanding of a Canterbury dry, he was told. Mr Guy showed his support for farmers and the rural sector when he met about 20 rural representatives at the home of sheep, beef and mixed cropping farmer Chris Allen.

The minister said his visit was not about announcing anything but was an opportunity for him to gather information.

He reassured people that the Government was focused on water storage.

''It is important for economic growth and great for the environment.''

He said the Government was also focused on providing emotional support to farming families.

A lot of support was available, particularly for depression, and collectively the sector needed to be able to point people in the right direction to access it.

''Farmers are resilient. They're not interested in the handouts,'' Mr Guy said. Many speakers emphasised the need to make on-farm decisions early, and warned that winter feed could be in short supply and expensive.

Winter crops were not looking good, silage was in short supply and there would be a shortage of fodder crops later on.

Both Doug Archbold, from the North Canterbury Rural Support Trust, and Sarah Barr, from the South Canterbury trust, said they were already dealing with farmers under stress.

Mr Archbold said store lambs had dropped in price by $15 and there was difficulty getting space at freezing works.

Mrs Barr said she knew of one dairy farmer carting a tankerload of water in for every tanker of milk that left the property.

She said the trust had laboured long and hard to promote forward planning.

Ashburton mayor Angus McKay told the minister if stored water and 100%-reliable irrigation were available, it would give the district's farmers the confidence to produce high-end seed crops.