Food from Around the World fundraiser goes down well 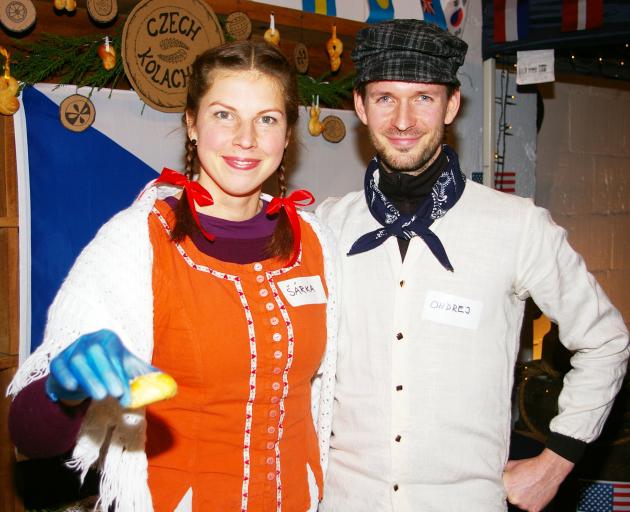 Tempting fellow Oamaru residents with kolacky, homemade Czech pastries, are Oamaru's Sarka Cibulcova and Ondrej Petracek at the St John building fund fundraiser Food from Around the World at the Loan and Merc, in Oamaru, on Saturday. PHOTO: HAMISH MACLEAN
From Tongan-style roast pig on a spit to Czech kolacky, Oamaru residents' global tucker was on the menu at the Loan and Merc in Harbour St on Saturday night.

Food from Around the World organiser Heather Burgher said 21 nationalities - all Oamaru residents - were represented, 4000 dishes had been created and all 200 tickets had sold to the St John building fund fundraiser, an idea that came to her as "a brainwave" just four months ago.

Since October she and her colleagues at Southern Wide Real Estate in Oamaru had donated $300 from qualifying sales towards the emergency rescue charity organisation's proposed new ambulance station to replace its current Coquet St station - but she wanted to do more, Ms Burgher said.

"It was really `bringing people together'. It's all about food, people, community and culture," she said.

Waitaki Mayor Gary Kircher, wife Kerry Kircher and local radio identity Dan Lewis judged each stall for its food, appearance and the experience on offer for a $100 cash prize, but Mr Kircher said it was just "really exciting" to see Oamaru's diversity on display.

After looking for a new site since 2014, St John began a public information campaign about its proposal to build a new purpose-built ambulance station in the corner of Awamoa Park in Wansbeck St in May.