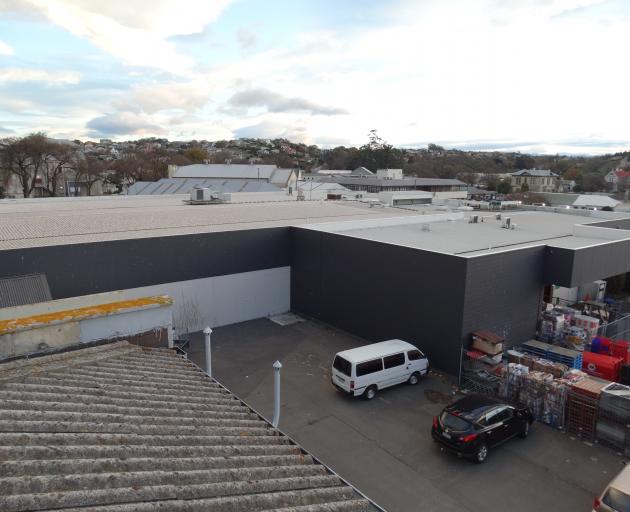 Countdown Oamaru, where large numbers of red-billed seagulls nest each year. PHOTO: DANIEL BIRCHFIELD
It may be several years before a solution is found to combat the smell created by flocks red-billed gulls nesting on the roof of Countdown Oamaru, the Department of Conservation (Doc) says.

Large numbers of the protected birds can be seen circling and landing on the Thames Highway building during breeding season, which lasts from September to January.

The resulting smell had upset some business owners in the area around the supermarket.

Countdown Oamaru store manager Mandy Manpreet said the roof had been cleaned nine times in the past 18 months to try to minimise the smell.

However, the company was not permitted to clean it during the breeding season.

Countdown was working with Doc in a effort to "deter the birds from nesting on our roof" during the next breeding season, she said.

Doc was made aware of the issue in November, but had been advised by Countdown staff the birds had nested there for "several years", community ranger Andrew Powazynski said.

He said it was likely a combination of factors led to the birds choosing the building as their nesting spot.

"It is the only large flat roof in the area and it's close to the harbour, with no chance of cats or other predators disturbing them. There are no people bothering them ... and there is a supermarket directly below them. For a scavenger bird such as this red-billed gull it is likely a prime location to nest."

Doc staff visited the area regularly during breeding season and was working with Countdown and scientific advisers to come up with a "humane" solution that "minimised impacts to the gulls while reducing disruption to the supermarket's business".

However, Mr Powazynski warned that may take "several years".

Badger & Mackerel cafe owner Bevan Smith described the smell as "disgusting" and said people had commented on it.

"It's not a good smell. As soon as you go outside ... it's absolutely disgusting ... when we say it's the seagulls they don't believe us."

Waitaki Mayor Gary Kircher was pleased Countdown and Doc were working together to try to "alleviate the problem".

The red-billed gull numbers have declined more than 50% since 1994 and there are fewer than 100,000 of the birds in New Zealand.