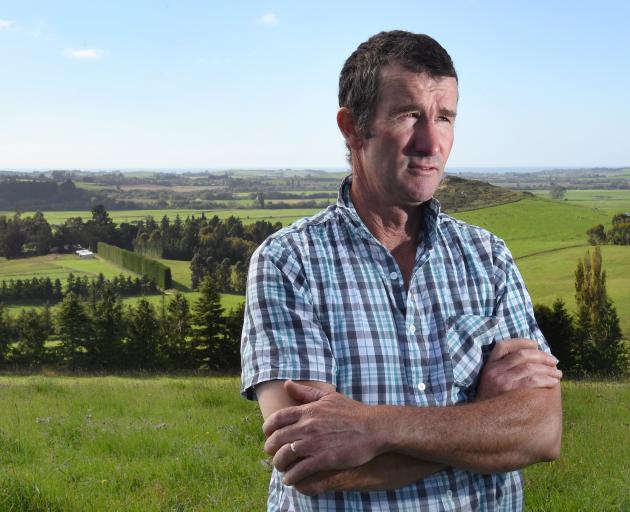 The sun is shining on a glorious autumn day in North Otago and the paddocks are covered in lush, green grass.

But something is missing; shelter sheds - usually home to hundreds of calves - sit empty and the 120ha farm is devoid of stock, apart from a few sheep.

"I’ve got no business. It’s stuffed and I accept that.

For more than a decade, the couple have run a successful calf-rearing business, buying 4-day-old calves, rearing them to over 100kg, and then selling them to other farmers. They usually rear about 1000 a year.

But that all came crashing down in August last year when their property was confirmed as having the bacterial cattle disease Mycoplasma bovis. That is when their nightmare began.

Now, they fear they - and other affected farmers - will be "screwed" as they fight for fair compensation.

It was possible, he said, that just one or two calves were infected with the disease but, with calves swapping teats on the calf feeders, there was a big infection risk as it was spread from animal to animal through close contact and bodily fluids.

From January 1, they sold calves to 18 farmers, of which 10 had been served with notices of direction - or restricted place notices - by the Ministry for Primary Industries.

When they received the positive test for their property, the Dwyers voluntarily sent 400 animals to slaughter - a number described by MPI in its media releases as  "small".

That was against the advice of MPI, which did not want them killed. The couple felt they had no other choice. Ask Mr Dwyer what the past few months have been like and he admits: "It’s just been worse than bad."

"MPI don’t like making decisions. All the farmers in our bunch have been dealing with the unknown," he said.

He acknowledged there was a high level of stress involved and that stress was palpably evident.

He felt a sense of responsibility towards those farmers and remained in regular contact with them.

"I got them into this, I sold them the animals."

"I live with that. I’ve got to look after them because we’ve got relationships going back years.

Mr and Mrs Dwyer’s claim - for about $180,000 - was solely for the animals slaughtered and they believed it was a fair valuation.

It did not cover loss of income - which could not be applied for until their notice of direction was lifted - nor did it include the likes of fertiliser or other costs, for which some others had applied.

Without that compensation, they could not afford to restock and there were "a whole lot of others" in the same position.

Mr Dwyer, who also works as a farm management consultant, said there was "no rubbish" in the claims put in collectively by his group.

Last week, it was publicised that 10 claims had been paid in part or full, which he believed were probably feed costs or similar because he did not believe any claims for cattle would be resolved easily.

"We have managed to get some feedback on where MPI are likely to pitch their offers. Maybe at 60% of what we are claiming ... that is also about 75% of what some animals were valued at by valuers employed by MPI," he said.

If a farmer did not like the offer eventually made to them, then they could appeal and go to arbitration. That process all took time and involved more money the further it went.

"We will all have to weigh up the MPI offer and decide our own pathway. Personally, Rosie and I will not accept less than what we have claimed for. We cannot afford to. So we may be in for a long haul on this," he said.

Incident controller David Yard said MPI could not comment on individual cases for compensation but it understood there were some farmers who were under "considerable stress" as a result of the actions it was taking to contain the disease.

"The compensation process is designed to ensure all verifiable losses that meet the compensation criteria are assessed fairly and that farmers are no worse off, but also no better off as a result of powers exercised by MPI under the Biosecurity Act in order to contain or eradicate the disease.

"We sympathise with farmers in this situation who we know are under enormous stress as we work to control this disease and who, through no fault of their own, have found themselves caught up in the response.

"However, the actions being taken by MPI are necessary in order to have any chance of getting rid of M. bovis for the benefit of all dairy and beef farmers," he said.

The compensation process was not a fast one but was a rigorous process to ensure taxpayers’ money was managed appropriately.

MPI had to be thorough in its assessment of claims to ensure their validity. After MPI had assessed claims, if they were over a certain amount of money, Crown Law must review them and the ultimate approval decision was made by the Cabinet. In the end,  farmers would receive fair compensation for any loss they had suffered due to MPI exercised powers, he said.