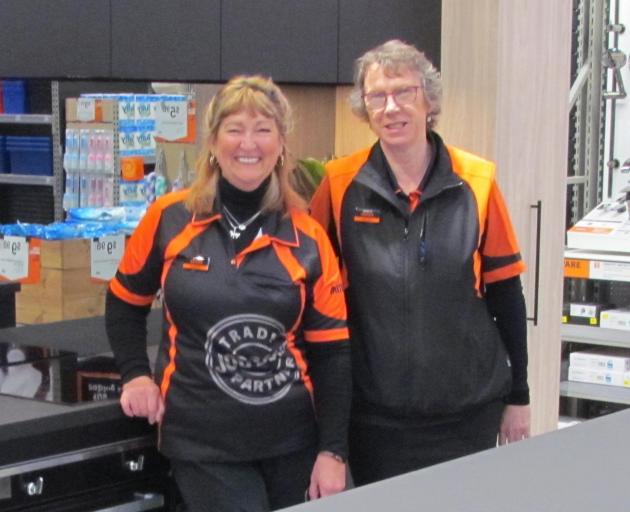 Oamaru Mitre 10 Mega kitchen designer Linda Smith (left) and store manager Nicky Kofoed in one of the designer kitchens on display in the new store. PHOTO: ASHLEY SMYTH
It has taken a mega effort and there have been mega delays, but Oamaru’s Mitre 10 Mega opened its doors to the public for the first time this week.

Construction of the 6000sqm store, located between Dee and Ribble Sts, took more than a year. It was delayed initially by the discovery of archaeological remains, and more recently by the Covid-19 lockdown.

The $18million project includes a 3140sqm retail area, a Columbus Cafe, a playground area, 671sqm garden centre and 100 car parks, as well as a 1520sqm drive through and 480sqm trade yard.

Store manager Nicky Kofoed said the car park had been full to capacity on the first day open on Monday, and the response when people walked through the doors was very positive.

"People stand in the doorway and just say ‘wow’."

Mrs Kofoed had worked for Oamaru Mitre 10 for 21 years, and said most of the staff had moved with her from the old store. The new store had created 25 to 30 new permanent jobs for the area, with a total of 68 staff members now.

Monday’s opening was the culmination of a lot of hard work.

She was excited for the people of Oamaru, who she said had been waiting for something like this for a long time.

The store is owned by The Collins Group, which also operates the Mitre 10 Mega stores in Timaru and Ashburton.

Group managing director Simon Lye said he was excited about the contribution the store would make.

"We’re excited to bring a Mitre 10 Mega to the Waitaki district, with a more comprehensive home improvement offer and more amenities for our community."

The store included kitchen and bathroom showrooms, which would be helpful for local tradespeople and their customers, Mr Lye said.

The business would support local children by offering workshops to help them learn basic building skills, as well as loaning out a community marquee for school fairs and sports days.

This weekend would be a special opening, with a free sausage sizzle, product giveaways and entertainment for children.