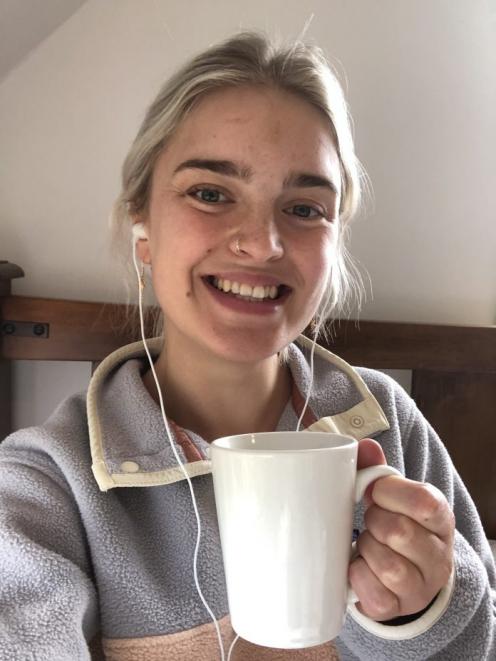 Molly Farrell drinks her ''millionth'' cup of tea in isolation. Photo: Supplied
It was not the overseas experience Molly Farrell was hoping for.

Just five days after moving to Ireland, Miss Farrell (24) saw the country start to take measures to prevent the spread of Covid-19.

As a qualified primary school teacher, she realised employment would be hard to come by as schools began to shut.

Miss Farrell had relatives to stay with, but she decided to return home to New Zealand while she still could.

“When I arrived in Ireland I realised the full scale of it all.

“Everyone seemed quite stressed.”

In Dublin, pubs were closed, even for St Patrick’s Day, and the usually bustling streets were eerily quiet, she said.

The return flight cost twice as much as her flight there, and many of the usual routes were closed.

Upon arriving back in New Zealand, she was told she would be required to self-isolate for two weeks.

Everyone she spoke to on the plane back home to New Zealand seemed to be taking the situation seriously, she said.

Living with her parents in Oamaru since last week, she had been feeling well, but taking every precaution to ensure proper isolation measures were being followed.

“If everyone got it, it would be terrible.”

As the rest of the country now joins her in isolation, Miss Farrell had a few tips on how to pass the time.

She had managed to catch up with friends and family on the phone.

“Use moisturiser because your hands get dry from all the hand-washing,” she said.

“Try to get outside, and you can still cuddle your pets.”

Even though her trip was cut short, Miss Farrell said it was a relief to be back in New Zealand.

Her parents are from Ireland, so she has a passport to return when she is able to.

“I’ll probably go back, after this settles down.