Socks of many colours for rest-home residents 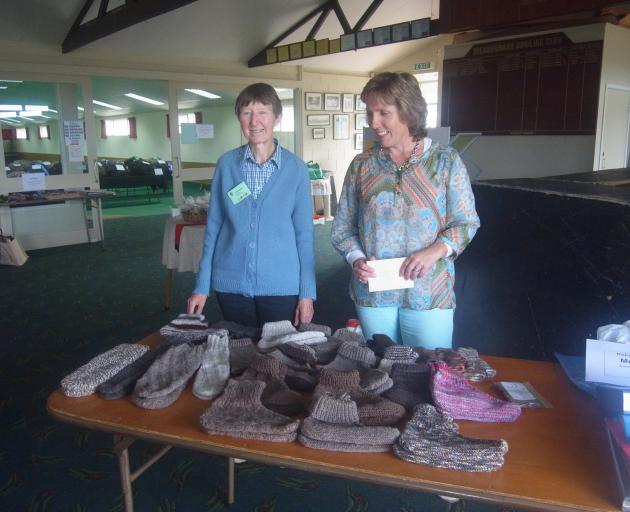 The association held its annual conference in Oamaru, bringing in more than 50 delegates from across the country. As well as attending meetings and competing with their coloured fleeces, sheepskins, handcrafts and photography, they made time to donate woollen goods to a local rest-home.

During the past year, the association's promotions committee and members have been preparing fleeces, spinning yarn and knitting bedsocks and fingerless mittens to give to the residents of Oamaru's Northanjer Rest Home. Northanjer co-owner Jacqui de Ruiter was presented with 18 pairs of socks and seven sets of mittens.

She was delighted with the natural colours of the wool, as well as the sets that had been overdyed, association promotions co-ordinator Georgie Fairless said.

''We know that wool is a natural, sustainable and comfortable fibre to work with, wear and keep us warm.''

The public was invited to view the fleeces and craftwork on display during the conference, and spinners and weavers attended a seminar on the types of wool produced by different sheep breeds. Members could advise on which were best for babywear, shawls, outer garments, felting and weaving.

''Visitors were also invited to purchase fleeces, craft items and sheepskins that were available for sale,'' Mrs Fairless said.

''Our conference included a bus trip around the Oamaru area, where we visited Ian Andersen, a limestone sculptor, the Riverstone Country Gift Shop and wine tasting at the Pasquale Kurow Winery.

''We look forward to the next annual conference, to be hosted by the Hawke's Bay branch in April 2018.''