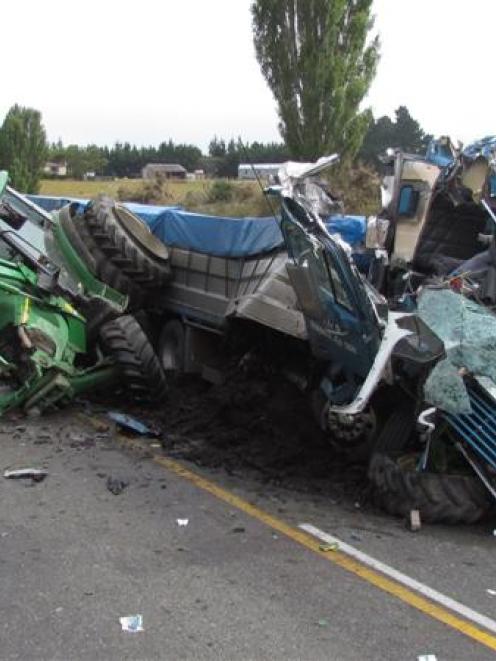 The crash closed the highway for about three and-a-half hours, from about 4.30pm.

Constable Anton Perham, of Oamaru, said the two vehicles collided in the northbound lane of the bridge, which crosses Kakaho Creek.

The driver of the southbound tractor told police his front left-hand wheel had caught the bridge's steel protective barrier, firing his vehicle across the road into the path of the northbound truck, Const Perham said.

Neither man's injuries were thought to be serious, although the truck driver, a 43-year-old Timaru man, was cut out of his cab and taken to Dunedin Hospital by rescue helicopter, with a suspected chest injury.

"We were very, very fortunate and could get him out.

"He was able to walk under his own steam, which was fantastic."

Seven firefighters from Palmerston and six from Hampden attended, he said.

It was not the first incident he had attended near the bridge, which lies on the south side of a wide, sweeping corner at the bottom of a long hill.

A police spokesman said the southbound lane reopened by 8pm, and northbound lane just before 11pm.

A police statement shortly after the crash warned no detour was available and motorists could expect a long delay.

Within hours of the crash, traffic was backed up about 2km in both directions.