Oamaru police said they would catch them and they did.

Two people who allegedly rammed a police car at Campbell Park Estate in the Waitaki Valley and then fled from police have been found and arrested.

Senior Sergeant Jason McCoy, of Oamaru, said a 34-year-old man from Christchurch and a 29-year-old woman from Waimate were arrested and are facing several charges after an incident at Campbell Park Estate yesterday, in which a vehicle was used to ram a police car about 4am.

The pair also allegedly stole a Toyota Hilux on State Highway 83 (Kurow-Duntroon Rd) about 11am yesterday .

They were located in Ferry Rd, where police stopped the vehicle using road spikes.

They then fled on foot before being caught by a police dog and arrested at 12.40pm.

Snr Sgt McCoy said the man, who had 15 charges between Waimate, Timaru, Christchurch, and now Kurow, was scheduled to appear in the Dunedin District Court today.

Police were initially called to the estate, about 60km north of Oamaru, at 3am after a suspicious vehicle was reported by residents.

Fuel allegedly had been stolen from a pump at the estate in Special School Rd.

Sergeant Tony Woodbridge, of Oamaru, said that when police arrived the Toyota ute drove off.

It was located an hour later in one of the estate’s private single-lane roads.

When cornered in a dead end, the vehicle rammed the police car then crashed through three farm gates, flinging one 20m to 25m away from its post, before crashing several paddocks away after which its occupants fled on foot.

Although the two police officers were not injured, they were ‘‘pretty shaken up’’ and fortunate not to be injured, Sgt Woodbridge said.

‘‘It’s not something you go to work and expect to have happen,’’ he said.

Police from Oamaru and a police dog unit from Dunedin were deployed in the area to located the alleged offenders.

Police were told by residents that suspicious behaviour had occurred over the past few evenings, Sgt Woodbridge said.

‘‘If there is suspicious behaviour going on, give us a call,’’ Sgt Woodbridge said.

‘‘If you don’t think it’s right, it probably isn’t, so let us know and we’ll check it out because we want people to be safe and feel safe in our community.’’ 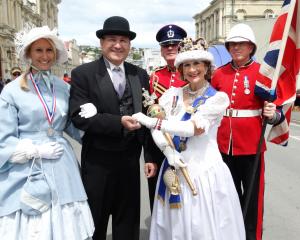