Photo posted by Daniel Otene. Photo: Supplied
A man wanted by police has thumbed his nose at the law, taking to social media to label the officers "doughnuts".

Daniel Leslie Otene, who has connections in the Christchurch, Tīmaru and Ōamaru areas, is wanted by police for failing to attend court and breach of court bail.

After police went public with a request for public assistance, Otene himself chimed in to lambast the officers.

Commenting on the Ōamaru Today Facebook page, Otene posted a photograph of himself making an obscene gesture and wrote: "F*** use wont find me in Ōamaru have a look around Quakecity ya doughnuts" [sic]. 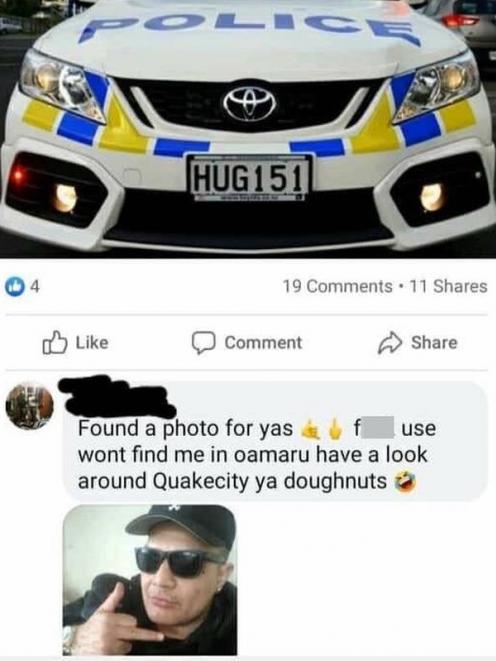 A screengrab of the post. Photo / Supplied
In a statement, police told The New Zealand Herald that "enquiries are ongoing to locate Otene".

They also had no comment on Otene's social media posts.

In 2014, Samuel Evan Lake got into a verbal stoush with Christchurch police over his own mugshot.

Christchurch police posted a photo of the 23-year-old on their Facebook page, appealing for information as to his whereabouts.

Lake, who had an outstanding warrant for his arrest, posted: "I need to get a new mugshot" below his photo shortly after it was posted.

It prompted Christchurch police to shoot back with: "Come see us and will arrange at no cost."

"If only they were as good at finding me as they were with comebacks," Lake replied.

Lake later changed his Facebook profile image to a Photoshopped version of the mugshot, altered to look like Ben Stiller's character from the movie Zoolander.

He was eventually caught.