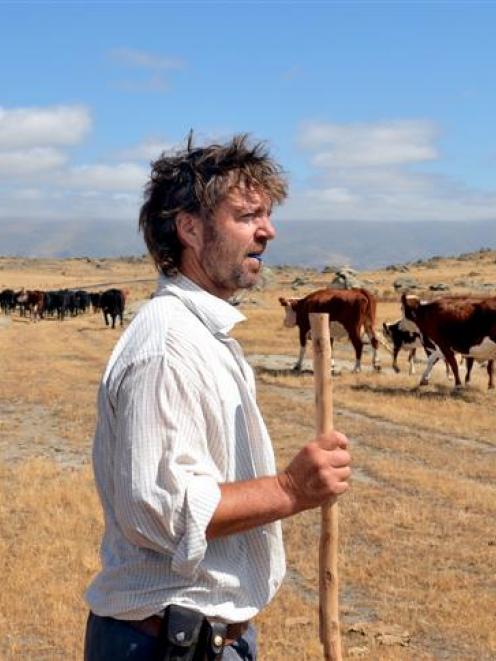 Middlemarch farmer Andrew Templeton moves cattle on his farm as feed for stock dries up. Photo by Stephen Jaquiery.
The reality of Otago's continuing dry weather is beginning to bite hard and an end to irrigation for some farmers is taking a financial toll.

Andrew and Lynnore Templeton have been a full week in a brown, baking Middlemarch with no water available from a Taieri River running below its minimum flow.

Federated Farmers said farmers were becoming alarmed at how fast the land was drying out, while the Otago Regional Council said it was continuing meetings with farmers to try to deal with the situation.

MetService says there is little expectation of significant rain for the next week.

Farmers with different rights to water were affected in different ways, but the Templetons had a resource consent for water that stopped access once the minimum flow was reached.

Yesterday, Mrs Templeton, of The Rocks Station, said a similar dry spell in 2008 had cost the farm about $100,000, and the couple were already buying feed and selling stock.

She said the real problems began when the irrigation stopped.

Mrs Templeton said the 3100ha farm ran merino and half-bred sheep, beef cows and calves, and wintered 800 dairy cows. It had 200ha of irrigated land to grow silage for its animals, and fodder beet for the dairy cows.

From December, the Templetons usually started growing turnips and swedes for winter feed, but had been unable to because of the dry weather, and ''we're rapidly running out of time to get winter crops in the ground and growing''.

Middlemarch had an ''exceptionally dry'' winter, and since August had just 82mm of rain.

The couple, and other farmers, were trying to get rid of stock because of a lack of feed, and the oversupply in the market meant low prices.

Federated Farmers Otago president Stephen Korteweg said farmers in traditionally drier areas were alarmed by the speed with which the country was drying out.

The fire ban had kicked in ''all of a sudden'', as had rivers dropping to their minimum flows.

''I think farmers are alarmed at how quickly it's turned round.''

Another two weeks of the dry weather would see conditions deteriorate, and mean it would take longer for farmers to recover.

Otago Regional Council chief executive Peter Bodeker said yesterday consent conditions varied for individual farmers. Some were getting no irrigation while others were still able to take water.

''I'm up to Middlemarch again tonight to talk to irrigators in that Strath Taieri area, just to see what we can do.''

The ORC had been assessing ''exactly what the flow is'' in the Taieri yesterday, and planned to do more work there today.

Flowmeters were being put in so the ORC could know ''very accurately how much water was in the river''. Mr Bodeker said the dry spell was mirroring 1999 and 2004 events, which were ''significant droughts''.

''These guys are really struggling.''

The long-range forecast was for mostly dry weather.

MetService meteorologist Nicole Ranger said little significant rain was expected in Dunedin in the next week, and ''even less in Central Otago''.