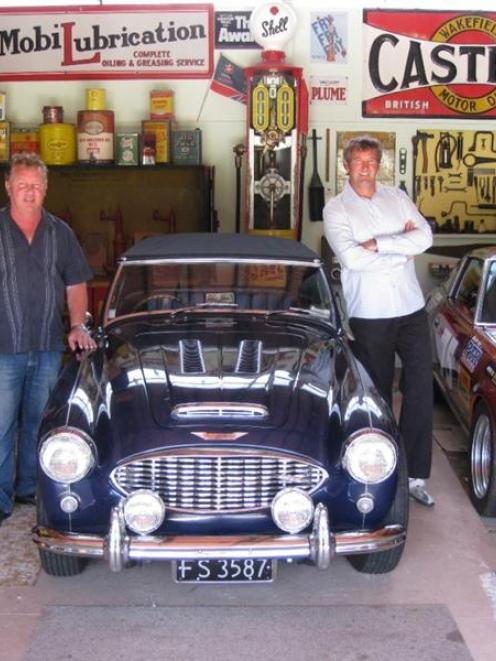 Rilean Construction directors Gary Dent (left) and Stephen McLean make themselves at home with an Austin Healy in car enthusiast John Taylor's garage.
Auto enthusiasts will be spoiled for choice at the Rilean Car Show next month, when more than 300 rare vehicles will be on display in Queenstown as part of the Queenstown Auto Extravaganza.

The weekend is designed to raise money for the Prostate Cancer Foundation of New Zealand, with Rilean Construction sponsoring the outdoor arena public car show on February 28 at the Queenstown Events Centre.

"Our team is predominantly male, so I think it's important for us to do our bit to help raise awareness of prostate cancer," Mr McLean said.

"Plus, there are many among us, and our clients, who are car enthusiasts, so we're really excited about the prospect of seeing so many fine cars in the Wakatipu."

Committee member Grant Coburn said the resort had never seen an event like this before and acknowledged the support from Rilean and other sponsors for helping make it happen.

"The car show in particular is a fantastic and rare opportunity for car owners to unveil their pride and joy and share their passion with the public.

"We're going to see some absolute gems come out of garages all over New Zealand."

The show would also feature the indoor "Vincent Holdings Concours d'elegance" - meaning only the "most beautiful" automobiles had been selected to appear.

The prizegiving would be held after the show at the Solid Gold Rock 'n' Roll Dance Party at Coronet Peak.

For more information or to book tickets, visit the show's official website www.queenstowncarshow.co.nz