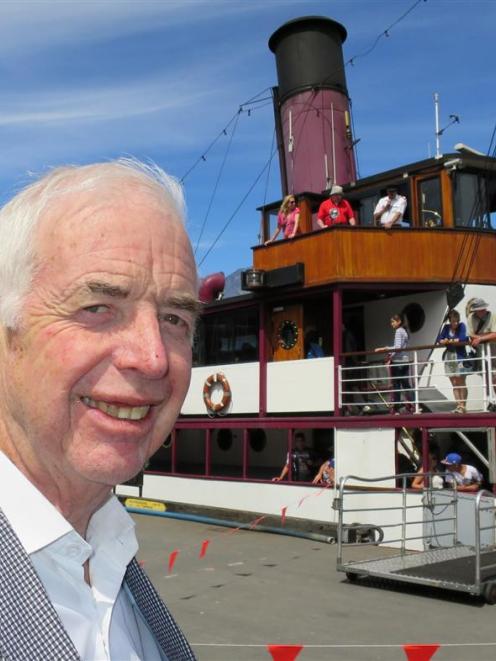 It is good news because, after relocating from Dunedin in December 2003, Sir Eion has already left a significant mark in town.

Without his readiness to part with substantial money, Queenstown Resort College and the Winter Games would not have got off the ground.

And the Queenstown Trails Trust could have struggled to raise money to complete its 110km network of cycling/walking trails around the Wakatipu.

The founder and longtime chairman of sharebroking firm Forsyth Barr, who has bounced back from double knee replacement surgery in October, said he was approached by educator Jan Fitz-Gerald to finance QRC in early 2003.

At the time he was still the Dunedin-based chancellor of the University of Otago.

Sir Eion said he first sought approval from the university's council to pursue the project once he retired as chancellor.

After eventually finding land for a building, the college opened for classes in 2006.

''It hasn't been easy. It's cost a lot of money, but it's been one of the best things for Queenstown.

''It's not seasonal - the kids are there 50 weeks a year - and it adds real value to all aspects of tourism.''

The Queenstown and Wanaka-based Winter Games, meanwhile, were the knight's own brainwave, when he was president of the New Zealand Olympic Committee.

He said the United States Olympic Committee was discussing a summer games for Pacific Rim countries when he said to his secretary-general, Barry Maister: ''Why don't we have a Winter Games, because all of these other countries are in the northern hemisphere.''

After a feasibility study by current chief executive Arthur Klap, the games have been run every two years since 2009.

The first event, coinciding with the global financial crisis, was particularly tough but, as with QRC, Sir Eion has happily bankrolled the games, because he believes in them.

''It has a huge multiplier effect in promoting the Queenstown-Wanaka region and giving young New Zealand athletes the opportunity to perform.''

Sir Eion said his trails trust involvement arose after he was invited to go on a tramp with a local walking group.

''A lovely guy called Cliff Broad said, `Eion, can you help us? I've got involved with this Wakatipu Trails Trust and it's going nowhere. Would you be prepared to become the patron and back it?'''

As he and his wife Jan, Lady Edgar, were keen walkers, he readily accepted.

Subsequently, along with chief executive Kaye Parker, he played a leading role in the campaign to raise $6 million to complete the trail network.

He said the trust was also fortunate it got government support to join the NZ Cycle Trail network.

Sir Eion, who allocates a third of his time to ''raising money for good causes'', says: ''I learnt from the early days that if you put your own money up first, it makes it a lot easier to then ask others.''

He is also a regular bidder in local charity auctions - the back of his garage is packed with items he did not want ''but the auction was a bit dull''.

Coming from Dunedin, whose people, he quips, have very short hands and long pockets, he says Queenstown has a very generous community.

''There's people who could do more but also there's an awful lot of people that go out of their way.

''To get 200 patrons for the Winter Games, 90% of them from Queenstown, just demonstrates the generosity.''

He has also never come across a more positive community.

''The wonderful thing about Queenstown is 98% of the people who live here weren't born here, so they made the decision to come here.

''They're then determined to prove they were right to make that decision, so you get this enormous enthusiasm.''