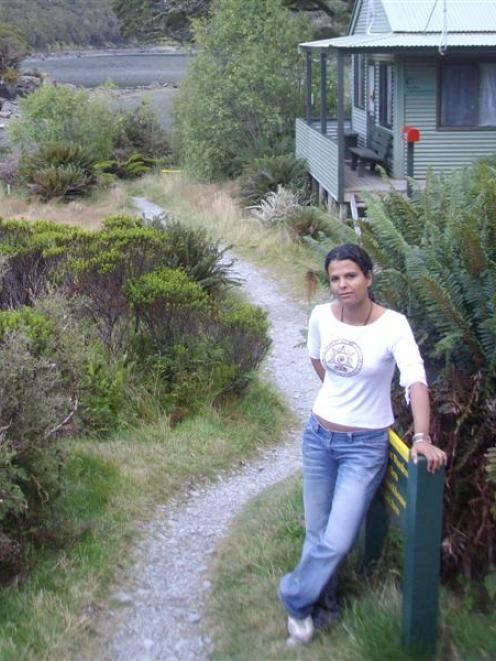 Israeli tourist Liat Okin outside the MacKenzie Hut on the Routeburn Track on the morning before she disappeared on March 25 last year. Her body was found six weeks later. This picture was taken on Ms Okin's camera by a tramper from Auckland who had met her.
Despite evidence from 14 witnesses on the disappearance and death of Israeli tourist Liat Okin on the Routeburn Track last year, coroner David Crerar was still unable to ascertain why she left a comfortable track to follow a bush-covered emergency route known only to Department of Conservation staff.

At the coroner's inquest in Queenstown yesterday, Mr Crerar found Ms Okin (35) became lost in the bush and died soon after setting up a bivouac-style campsite beside Roaring Creek in Fiordland National Park.

Mr Crerar said he received an unprecedented number of calls about the search effort, but as the search had been after Ms Okin's death, his legislated authority did not cover the search processes.

However, he praised the police search effort and later recovery of Ms Okin's body as "first-class".

While Mr Crerar gave succinct findings on the cause of death, he remained unsure why Ms Okin had left the "well formed" main track or exactly when she died.

Decomposition during the six weeks before the body was found destroyed medical evidence, but a high spinal fracture led Christchurch pathologist Dr Martin Sage to suggest Ms Okin had been paralysed from the shoulders down after a fall on slippery rocks the night she disappeared.

In his opinion, Ms Okin succumbed to hypothermia either that night or during the following day.

During the inquest, the question of how and why Ms Okin left the Routeburn Track was investigated.

Two Doc staff gave evidence there was an unformed secondary track in the area.

It was to be used in winter when avalanches routinely blocked main track access to Ocean Peak Corner.

The emergency route, which started about 12 minutes' walk from MacKenzie Hut, was marked with a piece of yellow tape tied to a tree 15m above and left of the track.

From there, the route was indicated only by tape markers tied to trees.

"If you didn't know where to look, you would not find it."

Mr Rule said Routeburn trampers were generally looking at the path ahead, although as a precaution he had removed the tapes.

Doc ranger and MacKenzie Hut warden Evan Smith said he knew of the track but had never walked it.

He was working in the hut when Ms Okin stayed there and recalled she arrived late, after a safety speech he gave.

"She looked a bit tired and I wanted to make sure she was OK," he told Mr Crerar.

He had not told her, or anyone else that he could remember, about the track.

Sgt Davis said experienced search and rescue personnel had trouble finding the track and he was surprised Ms Okin, a petite woman, would have negotiated without help the mostly uphill, bush-covered route while carrying a large pack and wearing sneakers.

When private searchers found Ms Okin's body, they found photos on her camera showing views from points on the route.

Using the camera's clock, police calculated Ms Okin took her first photo from a point on the emergency route one hour and 25 minutes after Ms Okin was photographed outside the MacKenzie Hut by a fellow tramper.

Just over an hour later, she took another five pictures of scenery, placing her on a ridge descending from Ocean View Corner.

From there, her path was not clear, although Sgt Davis and Constable Julian Cahill, of Queenstown, thought she had walked down the relatively easy ridge-line - either heading for Hollyford Rd or back to McKenzie Hut.

She would have seen both from certain points.

However, Roaring Creek was on her left and Const Cahill said "it would be easy . . . to go straight and end up descending into Roaring Creek" which had "extremely difficult" terrain.

New Zealand Mountain Guides Association president Aaron Halstead, who managed the safety on the retrieval operation, said judging by the layout of Ms Okin's belongings at Roaring Creek, she had been bivouacking.

"Food was sitting right beside the pack and a billy had also been placed nearby in a crevice. This appears to me the scenario of a camped or bivouacking tramper in potentially deteriorating weather or impending nightfall," he said.

Around the site were large boulders covered in moss and a slippery film.

"This terrain is very slippery and steep . . . She could have slipped into the river bed, fractured her neck and therefore rendered herself immobile," he said.

Mr Crerar agreed and found there was nothing indicating Ms Okin's death was suspicious.

His formal findings will be released after all affected parties have had time to comment - although he did not expect to make any unfavourable remarks.