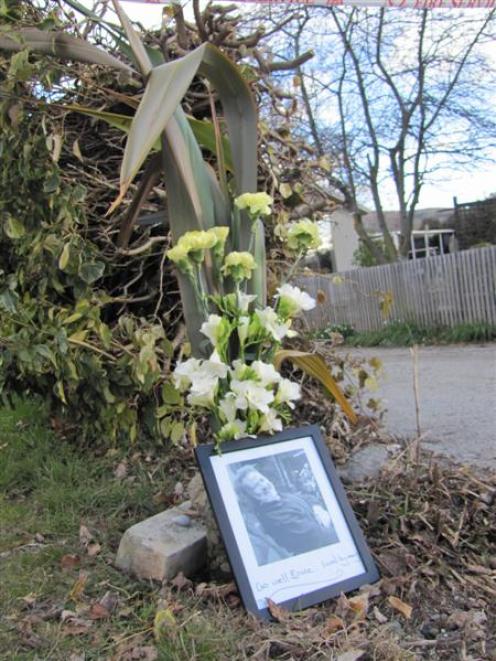 Floral tributes to Bruce Cochran outside his house in Albert Town yesterday. Photo by Mark Price.
The family of the 53-year-old man who died in a fire in Wanaka, early on Thursday has described his remarkable life as a ''gutsy'', hitchhiking paraplegic.

Police confirmed the man found by firefighters in the bedroom of a blazing sleepout was Bruce James Cochran, a single man who worked in the ski industry.

Yesterday his brother Phil Cochran, of Whangarei, talked to the Otago Daily Times about his older brother.

Bruce Cochran was born in the highlands of Papua New Guinea, in 1961, the eldest son of missionary parents.

''It was a really primitive, remote area. Some of the [Papuan] people hadn't seen white people before.

''That's where Bruce started his journey.''

The family returned to New Zealand in time for Phil Cochran's birth two years later and eventually settled in Whangarei.

At the age of 18, while riding his motorcycle, Bruce Cochran hit a train on a level crossing.

''Eyewitnesses said he actually impacted with the train and the helmet he was wearing certainly indicated he didn't just skid along the ground.

Mr Cochran said it was ''a miracle'' his brother survived.

Although the crash damaged his spine and left him a tetraplegic, Bruce Cochran gradually regained some movement in his left arm.

Phil Cochran said they were ''pretty close'' and the shock of the crash was a bit a like the shock of his brother's death.

''Even though he became disabled, in some ways he was always my big brother.

''He was lower in stature but still stood tall.''

After a two-year recovery period, Mr Cochran went back to his old job as a bank teller, although Phil Cochran said that did not work out.

''They had to give him his job back after he was rehabilitated but in those days disabled people were not as easily accepted into mainstream business life and he was given quite a hard time by the management of the bank.''

The 22-year-old paraplegic then bought himself a menswear shop in Whangarei and ''changed the face of Whangarei's menswear businesses for a while'', Mr Cochran said.

''It was very gutsy, and that's been the story of his life really,'' Mr Cochran said.

''In those early years you didn't dare ask him if he needed help.''

Mr Cochran's common response to offers of help was: ''I'll ask if I need help, thank you.''

He loved the menswear business, but eventually he closed the shop, and then after holidaying with his sister in Tahiti, about 1993, Mr Cochran's life took another turn.

Instead of heading home to Whangarei when he landed at Auckland Airport, Mr Cochran set out on a hitchhiking trip to the South Island with an old school mate.

That brought him to Wanaka and introduced him to the mountains which his brother Phil said he loved to be around.

''I think he looked at life differently, in a much more simple way.

''He learned to enjoy the beauty of creation in the Southern Alps more than worrying about whether he was wearing the right-coloured shirt.''

''We ended up with quite a different brother and a much happier brother.

''And some of that is credit to some of his mates who are down there.''

The hitchhiking continued and Phil Cochran said the family would drop Mr Cochran on the outskirts of Whangarei, and before long he would be on board a vehicle, often a truck, heading south.

Mr Cochran was one of six children.

His funeral will be held in Wanaka next Tuesday or Wednesday.