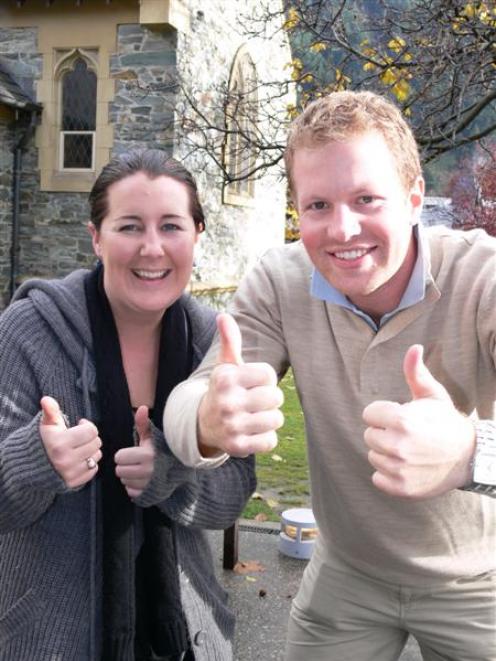 Wanaka man Hamish Ludbrook decided he would use a rowing machine to raise money - and awareness - of prostate cancer after a group of friends decided to enter a rowing race across the Indian Ocean, also to raise money.

"They were looking for crew and asked me. I said yes, but when I went to my family they couldn't handle it," Mr Ludbrook said.

His family has been severely affected by cancer.

Mr Ludbrook's grandfather died of prostate cancer when his father was only 6 and the disease claimed the life of an uncle at the age of 57.

Another has since recovered from cancer of the kidney.

Other family members have also been claimed by cancer, which has taken a toll, Mr Ludbrook explained.

However, he was determined to do something and, after considering various options, decided to follow his friends' rowing theme.

Not being "a rower", he decided on rowing in public places for two hours every weekday.

"We don't want people to feel we are busking," his partner and support crew Kim Marshall said.

"We don't want to ask people. We want to inspire them," Mr Ludbrook said.

So far, the Wanaka-based couple have raised $2700 in their first week.

They are keen to spread the message and will be appearing around Queenstown, when there is a fine day.

By raising money, the pair hope to support research into prostate cancer and raise awareness of a condition which has only recently begun to be talked about.

"There is a whole month devoted to breast cancer - but there is not much said about this male cancer," Ms Marshall said.

"It could take two weeks, it could be six."

However, Mr Marshall is determined to reach the end - which he believes will be about the same time his friends reach their destination of Mauritius.

The group has been doing well and lies about second in the race "although that is not why they are doing it".

"They are doing it hard. I don't have 7m swells and sharks," he said.

"They have a blog . . . the other day one of them had a real dark time - "he really had to do a bit o soul-searching to remember why he was out there."

• To support Hamish Ludbrook, either look out for him around Queenstown,or go online to www.fundraiseonline.co.nz/roamingrower.