Special weekend for kids and families in southern snow 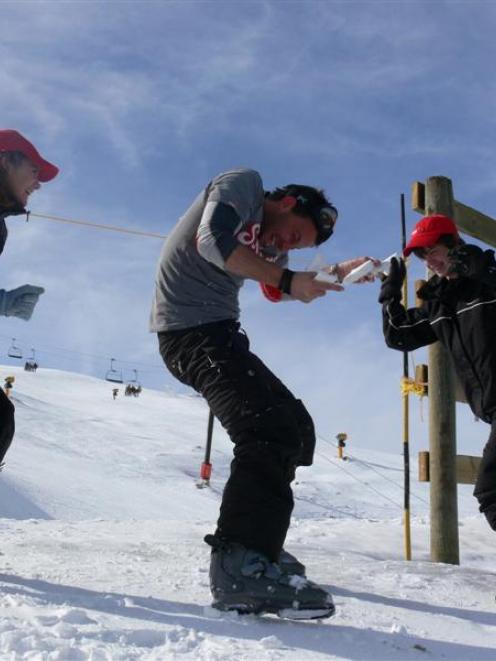 Actor Craig Parker (centre) awaits the next snowball from Aucklanders Danielle van der Heijden (14) and Michael Todd (14) during the Cure Kids Ticket to Hope activities at Coronet Peak on Saturday. Photo by Felicity Wolfe.
A weekend in Queenstown was exactly the right medicine for a group of children during the weekend.

The Cure Kids-organised Ticket to Hope weekend brought 13 children and their parents from all over the country to stay at the Mercure St Moritz.

The plush hotel served as a base for a range of adventures and new experiences, including an afternoon in the snow, Kawarau Jet boat rides and chocolate-making at Patagonia Chocolates in Arrowtown.

It was the chocolate-making Shardei Nathan (11) was most looking forward to - although her grin after a quad bike ride on Coronet Peak spoke volumes.

Shardei, from Whangarei, was diagnosed with a brain tumour and spinal cancer in February.

Like all the children on the weekend trip, she enjoyed the opportunity to just have fun.

Shortland Street stars Craig Parker and Renato Bartolomei were also revelling in the opportunity to relax while helping make the weekend a special one for the children, who have all experi- enced arduous hospital stays and treatments.

Bartolomei became involved with Cure Kids after organising a trip to the Shortland Street set for a young quadriplegic fan in Auckland.

"He has been absolutely fantastic with the children," organiser Josie Spillane said.

"We are very grateful for Renato's support and to have him here with us."

It was Bartolomei's second Cure Kids trip to Queenstown.

The festivities began on Friday night with a party which gave the children and their parents an opportunity toshare stories and experiences.

"It's a break for both of us," parent Meagan Bolton of Auckland said.

"It is really amazing to see kids with other disorders . . . on a cool trip."

Her son Tristan (11) has type one diabetes and coeliac disease, but that was pushed into the background over the weekend.

Oamaru parent Nadia Climo, whose 9-year-old daughter, Roshan, was diagnosed with diabetes aged 1, was glad to be able to share her experiences with other parents.

She was also one of the three parents who braved a AJ Hackett bungy jump on Saturday morning - earning the admiration of her daughter.

"My mum jumped off the bridge," Roshan told the Otago Daily Times.

On Saturday afternoon, the group headed to Coronet Peak for an afternoon of fun in the snow.

After a hearty lunch, the group rode quad bike rides and rode the chairlift for a snowfight or two and the chance to take aim at their new television celebrity friends. 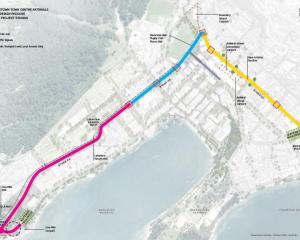