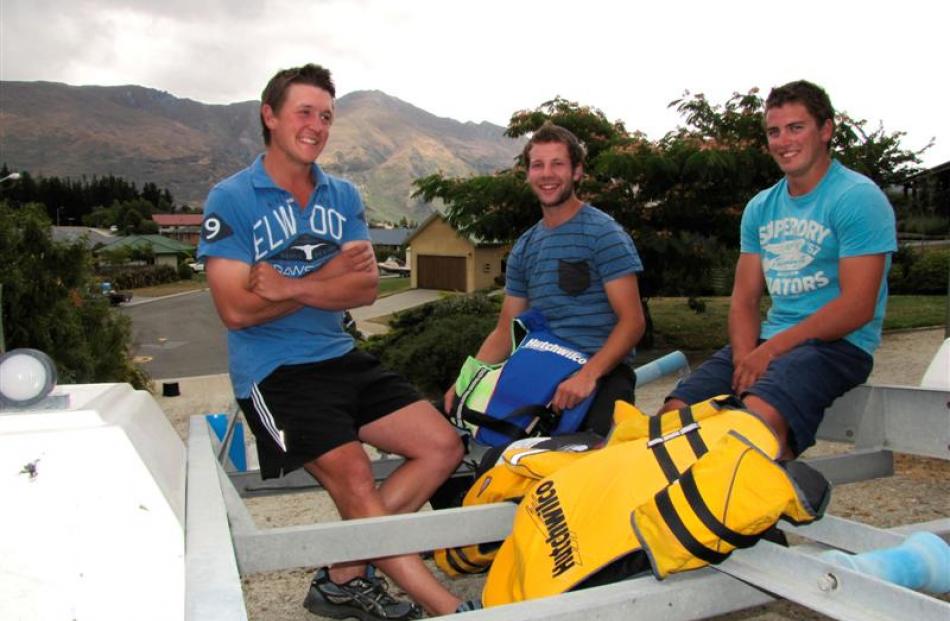 Reflecting on their rough night in a drifting boat on Lake Wanaka yesterday are rescued boaties (from left) Jared Clarke, John Totty and Adam Faulks. Photo by Marjorie Cook.

Three men rescued from a broken down, waterlogged boat in strong winds on Lake Wanaka early yesterday are now teasing each other about the stories they could tell on each other at Jared Clarke's engagement party in Dunedin tomorrow.

But Mr Clarke (24), a Duntroon dairy farm worker, his future brother-in-law and groomsman John Totty (22), a Staveley dairy farm worker, and his best man Adam Faulks (24), a Wanaka plasterer, were also planning a special "thank you" for Coastguard Wanaka Lakes.

The Coastguard unit launched two boats and seven volunteers at 11.10pm on Wednesday.

Volunteer Graeme Vallance described conditions as "terrible", while Mr Faulk's stepfather, Trevor Campbell, said the lake was "like an ocean".

Coastguard vice-president Johnny Rogers said there was no moon and visibility was poor, with a 20-knot northwest wind creating a 1.5m-2m swell.

"We are really grateful to the Coastguard for coming and picking us up in the middle of the night," Mr Clarke said.

"We are planning an appropriate thank you for them."

The men were returning from a three-day hunting and waterskiing camp at Stoney Creek, near Mt Burke, about 9.30pm on Wednesday when their borrowed 5.8m Crestcraft boat developed engine problems and became inundated by rolling white-capped waves.

The men, who were wearing life jackets and had cellphones, personal locator beacons and torches on them, removed heavier clothing and got ready to swim, feeling confident they could make the 50m-100m distance to shore.

But they decided if they left the boat, they would have no control over where it went.

"We got organised for all the bad things. We had plans A, B and C," Mr Clarke said.

They attempted to anchor and checked the points, oil and fuel again but drifted several kilometres back towards Mou Waho Island, narrowly avoiding a reef to the east of it.

With the intermittent cellphone coverage, it took some time to contact Mr Campbell, who alerted the Coastguard at 10.30pm.