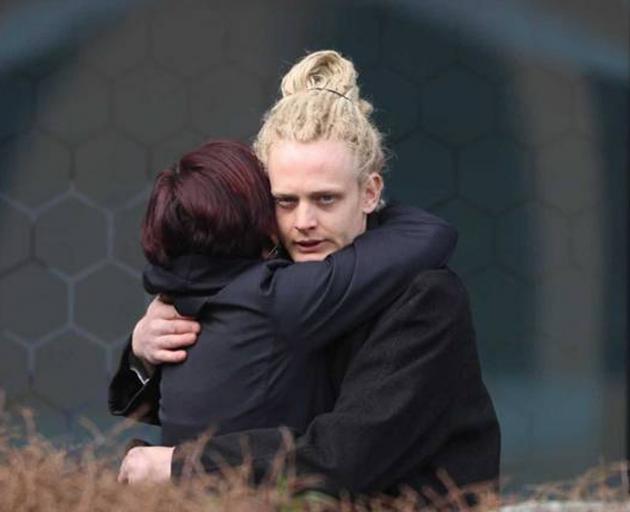 Campbell Page hugs a supporter outside the Christchurch District Court yesterday. Page was discharged without conviction after admitting careless driving causing the death of Olivia Brown near Arrowtown last year. PHOTO: GEORGE HEARD
The mother of a 22-year-old woman who was killed in a 4WD accident has said she "carries tears with her always" and "will grieve the rest of her life" about the fact her daughter was killed by someone who should have taken better care of her.

Campbell Thomas Klubein Page (25), landscape gardener, of Christchurch, was behind the wheel on January 30 last year.

His girlfriend, 22-year-old Olivia Kate Brown, was in the passenger’s seat.

Neither were wearing seatbelts as they drove on an off-road track in Macetown, near Arrowtown.

While negotiating a bend, they hit schist and Page overcorrected, which caused the vehicle to roll 41m down a cliff-face.

Miss Brown was thrown around inside the vehicle and suffered fatal head injuries.

In May this year, Page admitted careless driving causing her death and was yesterday discharged without conviction by Judge Stephen O’Driscoll in the Christchurch District Court.

She described her daughter as a "kind, gentle woman" who "healed people inside and out" through her work as a massage therapist.

She was a twin and died just before her birthday.

Ms Thomson-Bush said she could not comprehend the full extent of what had happened.

Page sought a discharge without conviction on the basis the consequences of a conviction would be disproportionately severe.

Page said he was not "being flashy" and his lawyer submitted losing control of the vehicle was understandable on a 4WD track.

He submitted it was the overcorrection of steering that was careless.

Page could not gain proper control over the vehicle because he was not wearing his seatbelt, and had been told a seatbelt might strangle him on a bumpy 4WD track, the lawyer submitted.

Judge O’Driscoll said the carelessness in this case was "less serious" than in others, but noted that not wearing a seatbelt was "plainly incorrect" and added to the gravity of the offending.

He found the primary consequence of a conviction would be on Page’s employment prospects.

He said Page had already experienced the consequences of the crash, including the death of his partner and post-traumatic stress disorder.

The discharge was conditional on Page paying $5000 to Miss Brown’s mother within 28 days.

He was also disqualified from driving for 10 months.