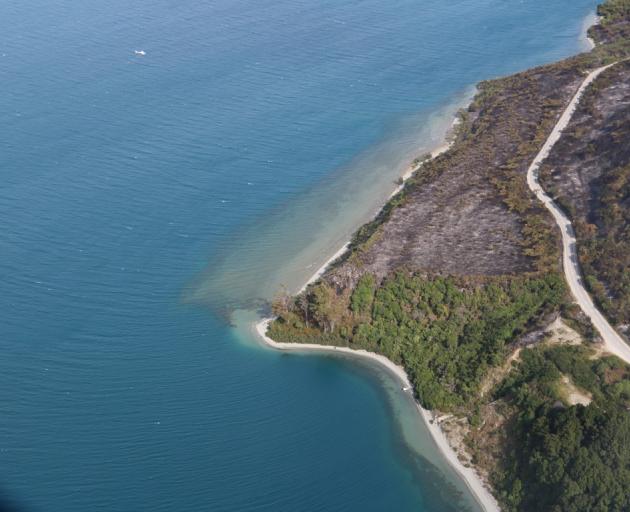 About 150ha of native scrub and vegetation was destroyed by the fire. Photo: Jimmy Sygrove
An investigation into the the huge blaze near Glenorchy this week is now focusing on a couple seen in an older model station wagon.

Police yesterday said they were interested in a white van that was seen in the area where the fire started, on the beach below Rat Point. However, today they said they had been in contact with the owners of the van and were confident they didn’t cause the blaze.

Information provided by the van occupants has led the investigation team to seek an older model dark-coloured station wagon, possibly grey or green, occupied by a man and a woman, thought to be in their mid 20s. The couple had been down by the lake and were seen coming back up, getting into their car and driving away just before the fire started.

The blaze was spotted by a farmer on the other side of Lake Wakatipu at 11.30pm on Tuesday.

At its peak, eight helicopters with monsoon buckets and 50  firefighters on the ground worked to contain the blaze.

The road between Queenstown and Glenorchy was closed for about 15 hours,  and power was cut to 350 customers for almost 24 hours after six power poles were incinerated.

Lead investigator Jamie Cowan said he was impressed with the public response to yesterday’s request for information.

“We’ve been blown away by the number of people who have been in touch, it’s a real testament to the community that so many people want to help out.”

“If anyone has any further information about the new vehicle of interest, or anything else that may help out with our investigations we would very much like to hear from them.”

If the public has any information they are asked to call ORFA on 0800 673 473 or contact the Police.