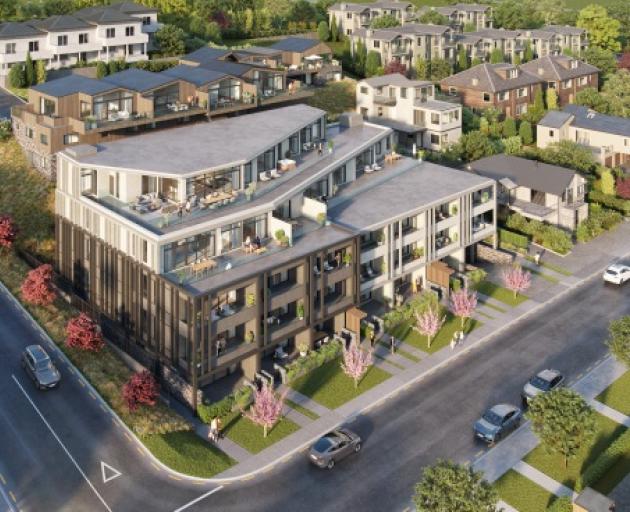 A planned apartment complex on the corner of York St and Hallenstein St. Image: Supplied
A multimillion-dollar luxury residential complex is planned for a site in central Queenstown.

Rob Neil’s Safari Group - behind four local apartment hotels including Ramada and Wyndham Garden - proposes to build 25 apartments and, behind them, six townhouses, on the corner of Hallenstein and York Streets.

Lakecrest Apartments has a retail value of $86 million.

Safari last year bought the largely-excavated site, which has a troubled development history.

Aussie developer Lachlan Francis had tried to build a 16-unit complex called Freshwater, but his CSF Trustees was placed in liquidation, owing $4.2m-plus to 18 unsecured creditors.

His company also had plans for a 24-unit development, Water mark, on the top part of the site, but its resource consent was struck out by the High Court following neighbours’ objections.

Neil says because of these earlier issues, he’s asked for his resource consent application, lodged this week, to be "partially notified" so neighbours get a say.

He adds he presented the plans to neighbours just before Christmas and also put up height poles "to give some more indication".

His application says given the apartments breach the seven-metre height plane "in some places", and the townhouses don’t comply with their zone’s density or building length requirements, "the adjacent properties may be affected to an extent that is not less than minor".

Neil, however, says he’s "really, really happy" with the design by Auckland-based Studio 37.

The apartments include three penthouses on the third and fourth levels.

Neil says he’s buying one 450 square metre penthouse for about $7m — "I’m in the process of selling my house at Jack’s Point so I’m going into there" — and has a contract on another.

The other two- to four- bedroom apartments range from $1.7m, while the townhouses —two of which are also spoken for — are selling from $2.8m.

Neil explains Lakecrest is "totally residential with the opportunity to turn to visitor accommodation on specific units if desired".

"We’ve released it to VIPs only, and it will get released to the market late February."

Selling in these Covid times isn’t a problem, Neil says: "Hell no, we think it’s a stronger offering with New Zealanders wanting to stay home."

He’s hoping to start construction in September for completion early 2024.

Meantime, he says "we’ve tidied up the site".