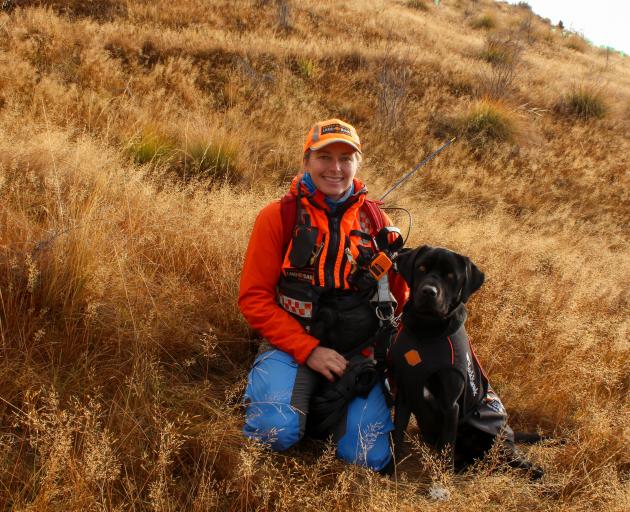 Stag, a 21-month-old Labrador Spaniel, comes from a strong line of hunting and search and rescue dogs from the West Coast.

He recently passed a police test in Waiouru to allow him to become operational.

Wakatipu LandSAR volunteer Bridget Martin, Stag’s handler and a sergeant in the Queenstown police, has spent countless hours to get him to operational status, starting training at only 10 weeks old.

Sgt Martin has more than 10 years’ experience in search and rescue, and is a team leader at the Wakatipu branch.

She said Stag received daily training as a puppy, and was now usually trained three times a week, although she did a brief exercise every day with him.

Training exercises included following pre-laid tracks, and finding objects dropped by other volunteers. Stag had to follow these tracks and alert her to anything found.

It took a community to raise a search and rescue dog, she said.

He was just one part of the wider search team, which also included visual trackers and helicopter teams that worked together.

“Everyone is dedicated to finding the lost, the missing, and the injured ... we’re all part of one big team.”

Before Stag’s arrival, the nearest tracking dog was based in Dunedin.

Not all dogs trained made operational status, something that was difficult for their handlers given the amount of time and effort involved in training them, she said.

Wakatipu LandSAR has 70 volunteers, who are called out at any time, 24/7 if required.

On average, the team responds to about 20 callouts a year.