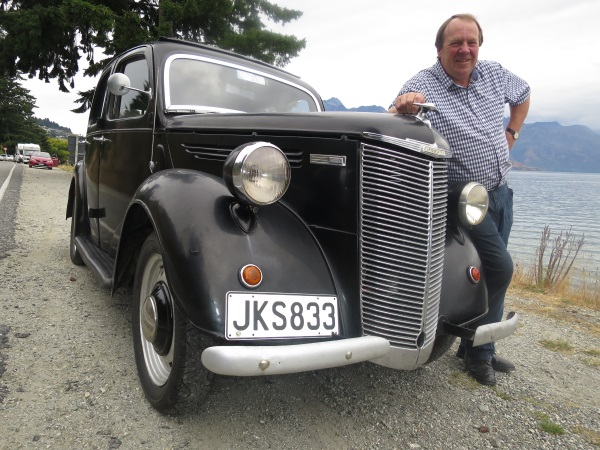 Warwick Stalker was gifted a model of his original car, a 1947 Ford Prefect, for his 70th birthday. Photo: Mountain Scene
Queenstown lost a well-loved character with the passing this month of Warwick Stalker, aged 74.

Sociable and generous-hearted, he was the driving force for most of his adult life behind heating, ventilation and air conditioning business RHE Mechanical and, more latterly, Flints Plumbing.

He’s survived by his wife of 29 years, Suzie, children Tania, Reece and John, stepchildren Carolyn and Michael and 10 grandchildren.

Warwick took over the reins of then Dunedin-based RHE, not long after it was established in 1966, then moved to Queenstown in ‘97 to run it with his son, John.

He’d regularly holidayed in the resort from a young age — his late father, Trevor, had substantial property interests here.

In business, he was very good at winning jobs and pricing them, Reece says — ‘‘he had a very good technical knowledge’’ — and oversaw many major local projects like the southern hemisphere’s largest water-sourced heat pump system, for the Hilton hotel complex.

‘‘He was always the first to work and usually the last to leave and he was there every weekend.

‘‘If anybody had a problem they would ring him, and he would do all the horrible little jobs we didn’t like doing, but he always said, ‘no, he’s a mate of mine, we’re going to do it’.

‘‘Even to the end, he wanted to come and see the plant system at Holiday Inn Express just to make sure we’d done it right.’’

At his funeral, John said his dad had taught him everything, and told him to keep the values of loyalty, honesty and integrity to the forefront — ‘‘always work to those and you’ll go a long way in life, boy’’.

In 2013, Warwick stood unsuccessfully for Queenstown’s council in a bid to help it with looming ‘‘infrastructure problems’’.

He told Mountain Scene: ‘‘When you see consultants’ reports come across the desk at council, I’m often wondering whether the council have the ability to know what the hell they’re looking at, half the time.

‘‘It’s not their fault, but it’s something that I understand.’’

Speakers at his funeral said he’d give the shirt off his back to help anyone, always made people feel welcome and loved his food and wine.

Among many charity auction items he bought were knickers belonging to tennis star Anna Kournikova, which he kept in his ‘pavilion’ at home.

His interests included golf, bowls and, earlier on, sailing.

A highlight came when his children surprised him with a model of his first car, a 1947 Ford Prefect, for his 70th birthday.

‘‘It was just driven to the front to take us [to his birthday party],’’ Suzie says.

‘‘Warwick just didn’t know where to put himself.’’