Pair shaken after fall off jetski into rapids 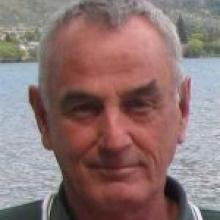 Dave Black
A Methven woman holidaying in Queenstown who was rescued after she, her husband and their poodle fell off their jet ski into the fast-flowing Kawarau River on Saturday was "extremely lucky" to escape without injury, the deputy harbourmaster says.

Police were alerted at 3.30pm that a woman was stranded on the river, near Smiths Falls, just downstream from the confluence with the Arrow River. The couple had reached the rapids on their jet ski, realised they could not go any further and attempted to turn around.

"Both fell off as they were side-on to the current. She floated down to an eddy and crawled out on to a rock," Sergeant Kate Pirovano, of Queenstown, said.

Queenstown Lakes deputy harbourmaster Dave Black confirmed the couple were wearing life jackets. The woman was swept about 25m down the rapids, which were "at a reasonably easy level at the moment", until she was able to swim to a rock shelf, estimated to be 10sq m to 12sq m, and stand up.

She was not in danger where she was, Mr Black said.

Sgt Pirovano said the husband climbed back on board the jet ski and went for help upstream. He flagged down a Kawarau Jet boat.

The driver called his base, which called Queenstown Lakes harbourmaster Marty Black, who called the police. The Wakatipu Search and Rescue team, Alpine Cliff Rescue and helicopters were on standby until details of the predicament were known.

Mr Black and private jet-boat operator Neville Kelly, who is experienced in white water jet-boating, reached the woman and brought her back to the marina where she was reunited with her husband and dog.

The couple were shaken, but not injured. Nor was the dog.

Sgt Pirovano said the incident could have been avoided if the couple had read the warning signs at the Frankton Marina. However, when this was pointed out to the couple, the man said the writing was not large enough.

They had journeyed down the Kawarau River before, but not as far as Smiths Falls.

"It could have been a lot worse for them. They're pretty shaken up," Sgt Pirovano said.

"That river's pretty unforgiving if you get yourself in the wrong spot. You need to know the safe places to go and enjoy it, without putting yourself, or anyone else, at risk."

Mr Black said there was a warning sign where the holidaymakers placed their jet ski in Lake Wakatipu and also warnings in the available brochure.

"It's an area where they shouldn't be on jet skis - end of story. There's enough signage saying there's a five-knot restriction from the confluence of the Arrow River downstream.

"I think it's just people don't know the area and they just head on down there thinking they'll be OK, but in actual fact they're not OK. Most people don't bother reading signs and there is enough signage around."

Mr Black said the man had otherwise done everything correctly and had offered to pay for the cost of the boat and occupants to rescue his wife.

When asked if the dog wore a life jacket, Mr Black laughed and said: "We haven't brought that law in yet."