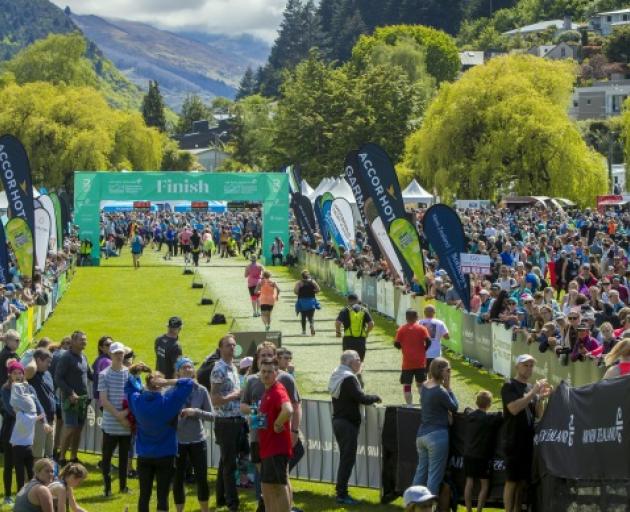 Tomorrow’s ‘‘D-Day’’, and a decision on the event’s fate will be made after Prime Minister Jacinda Ardern’s ‘‘roadmap’’ and vaccine target announcement, Ironman regional marketing boss Michelle Pepper says.

Planned for November 20, the marathon’s traditionally the resort’s second busiest weekend of the year, after New Year’s Eve.

While late last month race director Nicole Fairweather said organisers were ‘‘positive’’ Queenstown would be in Level 1 in time to hold the event, Pepper says, as of now, in Level 2, it can’t go ahead.

‘‘We’re hoping there’s going to be some ray of light when they present this roadmap that will be able to get the event away in some shape or form, but it depends on what’s presented [tomorrow].’’

Queenstown Chamber of Commerce chief executive Ruth Stokes says losing the marathon would be a massive blow for local businesses.

‘‘There are certainly a lot of businesses that are pinning their last hopes of a bit of a shot in the arm pre-Christmas on the marathon weekend.’’

‘‘That target, that date, that reopening is going to make a lot of difference to people to know whether or not they’re going to make it … or whether it’s going to be a bridge too
far.

‘‘Whether or not the marathon is the last nail in the coffin, there’s been a lot of nails.’’

Cromwell’s half marathon, 10km and teams relay event is going ahead this Sunday with about 150 people, and organisers will be segregating racers in three, 100-people-or-less ‘‘waves’’.

But Pepper says that’s not an option for the Queenstown Marathon, which has a total of 12,000 entrants, 8000 of those in the half marathon.

‘‘That start line is very, very busy and there’s no way we would be able to segregate like that.’’

She says the absence of Aucklanders wouldn’t be a deal-breaker as they only make up roughly 20% of entries.

‘‘Canterbury’s the biggest market so we just need to get Queenstown or the South Island at a level that allows us to operate an event of this size and then we’ll be cooking with
gas.’’

The current capacity restrictions have been a deal-breaker for Arrowown’s Cyclorama e-bike event, which was due to be held for the first time on November 13 and 14.

‘‘That was what really killed us,’’ event organiser Dave Gibson says.

The event, funded in part by the government’s $50 million regional events fund, is being pushed back to November next year, but a charity auction for a 10-person sneak peek
ride on the under-construction Coronet Loop bike track is still going ahead.

The ride’s happening on November 12 and proceeds from the auction, which ends at 10pm tonight, will be donated to the Queenstown Trails Trust.

Gibson says talks are continuing about what will happen to the funding for this year’s event, some of which has been spent on a website, signs and banners.

‘‘My understanding is that they’ll be reasonably understanding of the situation … a lot of what was spent will actually be really useful for next year,’’ Gibson says.

He admits planning has been a challenge due to uncertainty around Covid but is optimistic for next year.

‘‘Hopefully, eventually, [Cyclorama] would be come ingrained in the local community in the
same way that the marathon and Motatapu and things like that are.

Gibson says everyone who bought a ticket for this year’s event will be automatically refunded in the next couple of days.