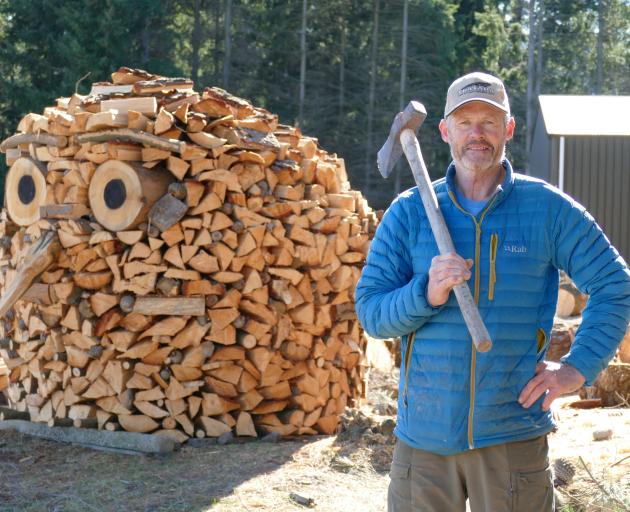 The arduous task of chopping and stacking firewood has turned into an art project for Mr Hylton, who, since lockdown, has been making various characters and shapes out of his woodpiles.

"I’ve got to stack the wood anyway ... I decided it would be quite fun to do something with a bit of flair to it because they sit there for a long time anyway," Mr Hylton said.

His first project was an owl, inspired by the brown owls living on his property.

That owl soon sparked joy among passers-by on the Queenstown Trail, which runs alongside Mr Hylton’s property.

"I kept going because everyone was enjoying them so much ... and I thought, well, that’s easy to get a smile on people’s faces — that’s what made me do it."

Since the owl, Mr Hylton has made a hedgehog and Fred Flintstone’s Flintmobile, and is now working on a spaceship.

The sculptures each took two or three days to make and were the result of careful arrangement, he said.

"I try not to think too hard about it, though, otherwise I wouldn’t get anything done."

Mr Hylton was coy about his artistic prowess, but confessed to making antler chandeliers and playing the drums.

Although retired, he was "still building" but was unable to work during Alert Levels 4 or 3.

There were many who "aren’t sure about tomorrow ... I think it’s really important that we cheer each other up".