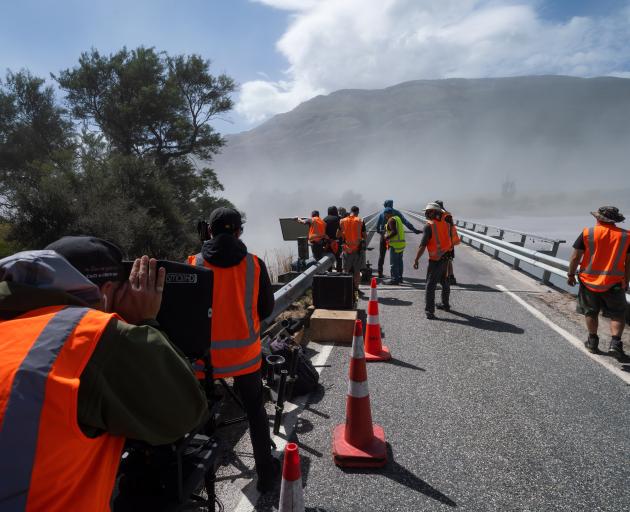 Shooting action from One Lane Bridge’s second season last year. PHOTO: STILL VISION PHOTOGRAPHY
The five television shows being filmed around Queenstown in the next few months are a huge boost for the beleaguered local economy.

Next week, shooting of the second series of romantic comedy Under The Vines starts in Queenstown, then switches between the resort and Clyde.

From April 4 until mid-June, the third series of crime thriller One Lane Bridge will again be shot in the Queenstown area, preparations having started this week.

Celebrity chef Nadia Lim is hosting new reality show Nadia’s Farm on her property above Arrowtown, which will "take audiences inside her rural life".

It is believed another new reality show, Discovery’s Tracked, in which international contestants race through "epic and harsh" terrain while evading "elite trackers", will also be shot in the Queenstown region.

It is estimated 600 people will be employed altogether on these shoots, injecting tens of millions of dollars into the area.

Location-based drama was proving to be a resilient part of the Queenstown film industry.

"We’ve got the equipment, we’ve got the people. Queenstown is fast becoming the strongest film industry outside of Auckland."

One Lane Bridge executive producer Philip Smith, of Queenstown, said it was an "unparalleled amount of production in Queenstown at one time".

"To have five productions is a real vote of confidence in the region.

"The council and other parties have said film could be a supplementary activity while we’re going through this [tourism downturn], and this is turning into a reality."

Mr Smith said crew and cast coming to Queenstown from out of town were "almost like your dream tourist".

"They’ve got a lot of disposable income and they love to spend it locally and on local things."

Under The Vines and One Lane Bridge will again be employing hundreds of locals as extras.

Monarch Model Management owner Tracie Patel said Under The Vines had "more activity in Queenstown this season", so more residents would be involved.

Ican Models director Tracy Cameron said it was a "double bonus" to be able to offer employment to people who might be out of work.

I wonder whether this will have any effect on the number of times Jimbo keeps telling the government that they need another handout because Queenstown is dying ???