0 Comments
Nearly 20 rain, snow and wind alerts are in force across New Zealand as a tropically charged low sets to unleash a burst of wild weather.

Much of New Zealand will be cloaked under grey skies today, with rain starting to fall at the top of the country and worsening across the day.

A number of South Island alpine passes are under road snow warnings with MetService warning of "impactful snow" across inland regions.

Road snowfall warnings are in place for the Crown Range Road, Lindis Pass and Porters Pass for early Friday morning.

MetService has also issued a heavy snow watch for the Queenstown Lakes District above 400m from 4am until 10am Friday morning.

Further north, the Canterbury high country could be in for heavier snow.

A heavy snow warning has been issued for south of the Rangitata River, especially around the Mackenzie Basin where 10 to 15cm is expected above 700m and 5 to 10cm down to 400m.

Rain warnings and watches stretch from Northland to Westland, with rain not letting up in some regions until 3pm Saturday. 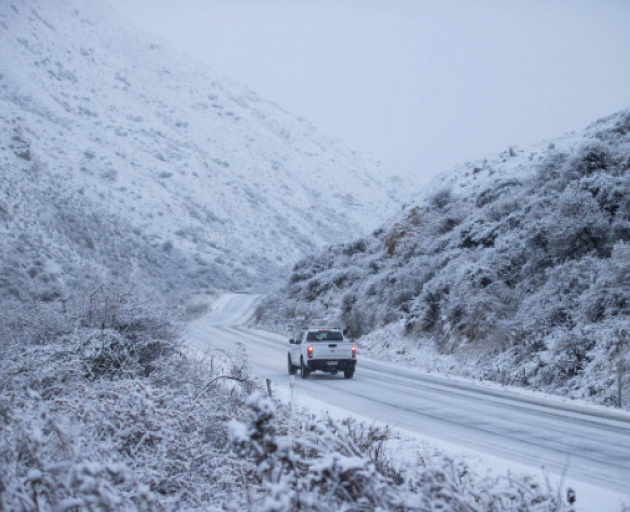 Snow is expected on the Crown Range Road early Friday morning. Photo: NZ Herald
The beleaguered West Coast could be among the hardest hit with a heavy rain warning in place south of Otira from 5am Friday until 3pm Saturday.

150mm-230mm of rain is expected in the region during this period and slips and flooding are possible.

Gales are also set to batter much of the country, with MetService warning wild weather is in store for nearly every region thanks to a subtropical rainmaker behind widespread flooding in New South Wales.

The incoming deluge could lead to flooding and slips in northern areas saturated by midweek rain.

Northland, Coromandel Peninsula, Mt Taranaki, Bay of Plenty, Rotorua, the ranges of Gisborne north of Ruatoria, Tasman west of Motueka and Buller are also under heavy rain warnings and watches.

MetService has also added a strong wind watch for South Taranaki, inland Whanganui and Taihape tomorrow and a heavy snow warning for the Canterbury high country.

"With the upcoming school holidays it could be worth taking the weather into account for your travel plans," warned MetService.

It's the first several major storms that forecasters say will sweep across the country in the next fortnight.

In its severe weather outlook, MetService says as well as heavy rain approaching warning criteria, Northland would likely be rattled by thunderstorms.

The large low and associated fronts were expected to move onto New Zealand from the west tomorrow, bringing heavy rain to many areas and strong winds to the north and snow to the central South Island.

Niwa weather said a series of strong lows, fuelled by rain from the tropics, were expected over the next two weeks.

Another was set to hit on Monday and more later in the first week of the holidays.

"The theme will be wetter than normal conditions with the potential for flooding," said the forecaster.

Weatherwatch.co.nz said the North Island would bear the brunt of the most unsettled weather in half a decade, with at least six lows bringing bursts of rain and wind in the next 10 days.

The forecaster said although not all lows were stormy, at least three were expected to produce "severe weather risks".

This winter pattern was the most unsettled the North Island had seen in half a decade, after five years of general rain shortage across the top half of the island, said the forecaster.