Joseff McCarthy, Niko Hill, Javarney Drummond, Andrew Goodger and Jack Wallace (not pictured) died in the crash in Timaru on August 7. Photos: Supplied
It has been seven weeks since a crash that killed five Timaru teenagers and the police investigation is ongoing with no word on whether the driver and only remaining survivor will face charges.

Javarney Wayne Drummond, 15; Niko William Hill, 15; Jack "Jacko" Wallace, 16; Joseff "Joey" McCarthy, 16; and Andrew Goodger, 15, were all killed when the Nissan Bluebird they were travelling in smashed into a concrete power pole on August 6.

Tyreese was taken to Timaru Hospital with moderate injuries and was well enough to post a message on social media the next day to let people know he was alive.

Aoraki Area Commander Inspector Dave Gaskin said today there was no update to the investigation and no one had been charged at this stage. 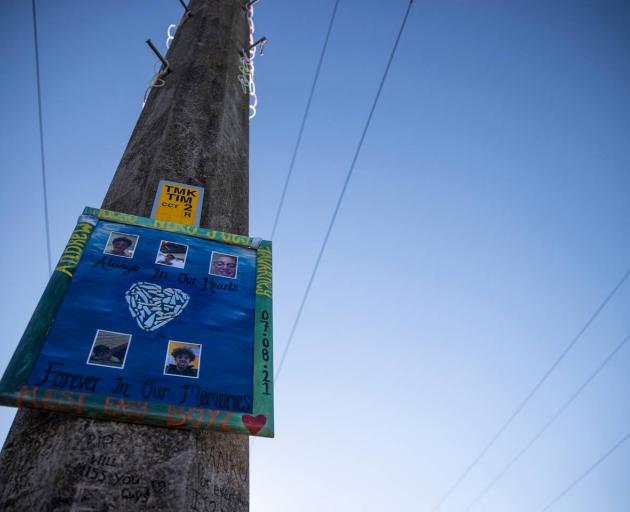 Tributes left at the scene of the crash. Photo: George Heard
He told the NZ Herald soon after the crash the investigation may take some time as officers piece together what happened on the fateful night.

He said speed and alcohol were thought to be factors in the crash, and it was clear many in the car were not wearing seatbelts.

One of the boys was in the boot when the car hit the pole.

Gaskin did not disclose today if police had interviewed Fleming.

"We won't be speaking to the driver until we have got a little bit more information - obviously the investigation is very early days at the moment, and it would be better to speak to him when we have as much information as possible," he said last month.

Neither Fleming nor his parents have responded to the Herald's multiple requests for comment.

A woman who arrived at the crash scene soon after the impact spoke about how she found Fleming in the wreckage.

Melissa Bryce said the first thing she saw was the rear half of the car.

She saw two people in the back.

She called out, asking if anyone could hear her. Nobody responded.

"Just by looking at the scene you could tell they hadn't survived," Bryce told the Herald from her home today.

But from somewhere in the darkness behind her, a voice said: "How the f*** did I survive this?"

"That's when I realised there was a survivor," Bryce said.

She went back to her car to grab her phone, wanting to use it as a torch.

After turning it on the scene, she saw the front part of the car.

The driver was still in the vehicle. She is unsure if he had a seatbelt on.

She went up to him and told him her name and asked if he realised what had happened.

Bryce asked the driver, who was clutching his cellphone, to turn off the car's ignition.

"He was in shock, you could tell," Bryce said.

"He was able to tell me that, yes, he had been in an accident and then kept saying, 'How did I survive?'

"I just kept talking to him, asking his name, his age, where did he work, what were the plans for tonight, and everything like that. Just making sure he made contact with me, to keep him awake."