No closure for mother of Winz shooting victim 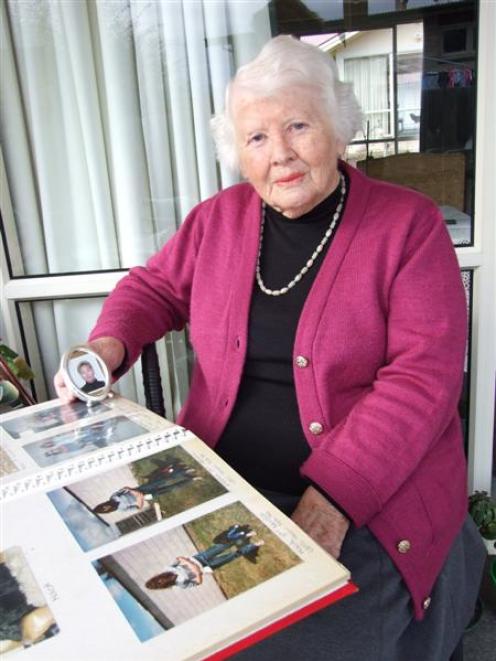 Kathleen Cleveland in her Alexandra home yesterday, looking over photo albums belonging to her late daughter Leigh. Photo by Lynda van Kempen.
A year to the day since two Winz workers were fatally shot in Ashburton, the Alexandra mother of one of the victims says there is no closure.

Kathleen Cleveland's daughter, Leigh, would have turned 56 on August 2.

''You just have to keep going,'' Mrs Cleveland said.''

It started because it was her birthday at the beginning of the month.

''She's there in the back of your mind all the time.''

Mrs Cleveland had talked to Leigh in August for her birthday last year, and then again on the phone about one week later.

''So that was the last time I spoke to her. I still find it hard.''

September 1, 2014, had begun like any other day, a Monday morning starting a working week.

It ended as a day that would go down in Ashburton's history as one of its bleakest.

Leigh Cleveland and Peg Noble lay dead and another, Lindy Curtis, was wounded in the town's Winz building. Police were hunting for their attacker.

In the hours after the shootings, search teams scoured the bed of Ashburton River, and schools were locked down. The Ashburton community was numb as people watched and waited nervously.

As the grey day faded into dusk, the man who would be charged with the shootings, Russell John Tully, was captured.

Over the days that followed the community mourned and wrapped itself around the grieving families of the victims.

People asked why the killings occurred.

There were no answers. Mrs Cleveland has found some solace in the fact her daughter was happy in Ashburton.

When Leigh first went and looked at the house she ended up buying in the town, she phoned her mother and told her it had felt right from the time she walked in the door.

Mrs Cleveland planned to stay home today in Alexandra, where Leigh was brought up and her sister and two brothers continued to live.

Her thoughts would be with the surviving Winz workers and fellow victim Ms Noble's family, as well as Leigh's dog club friends, who had been like a second family to her daughter.

With publicity at this time of year and an impending trial, they were an ordinary family thrown into a life they had never asked for.

''The thing is there's no closure,'' Mrs Cleveland said.

It was a tragedy that had no single cause; it changed lives, changed a community and left a social services organisation struggling to create a better and safer future for its staff.

The volume of support that flooded into Ashburton from around New Zealand was overwhelming. One town's tragedy became a national tragedy, one that could have happened in any Winz office, anywhere.

One year on, the ripples continue to be felt.

Ashburton's Winz staff now work from a new, temporary base in the grounds of the Ashburton police station.

The Cass St building that was the scene of the shootings is being given a new future as the district's social and community group hub, Community House.

For Winz staff there is heightened caution with 250 security staff in offices around New Zealand. Staff have been trained widely in dealing with conflict.

The push to improve safety and security was ongoing, she said.

''I think that Ashburton showed great strength after the incident and it was wonderful to see the many ways that members of the community reached out to those so badly affected by the tragedy.

''I guess communities can become stronger as a result of tragedies, but I would certainly never want it to happen, anywhere, again.''

No pleas entered yet

Russell John Tully made his first appearance in the Christchurch District Court on September 2, the day after the incident at the Ashburton Work and Income offices.

Tully, unemployed, of no fixed abode, faces faced two counts of murder and two of attempted murder. He is also charged with setting a man trap, unlawful possession of firearms and theft.

Although he has appeared in court he has not entered pleas.

He is remanded in custody and no trial date has been fixed. His last pretrial callover was last month.

One killed after tractor and train crash in South Canterbury