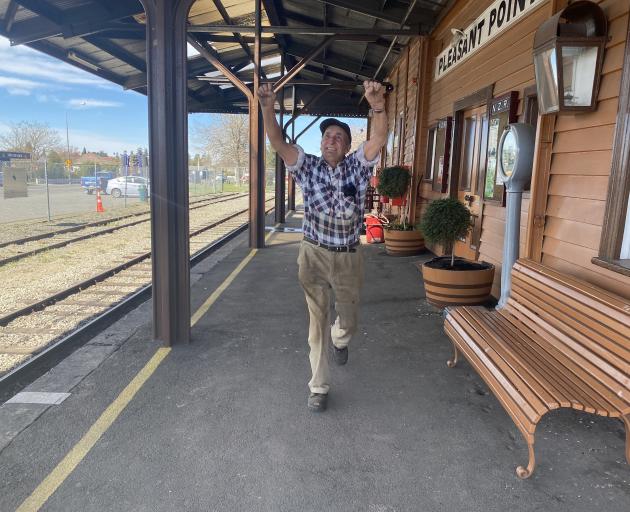 Pleasant Point Museum and Railway volunteer Bill Noble re-enacts how each day he chases away the pigeons which have found a new home at the station. PHOTO: SHELLEY INON
With their home in Pleasant Point’s St Mary’s Church destroyed by diggers, the clocktower’s feathered freeloaders have found new digs at the local railway station.

The Pleasant Point Museum and Railway volunteers claim that the new tenants are not paying board, and are leaving large piles of pigeon poo on the well-loved train platform and station walls.

Bill Noble is the volunteer in charge of the bird situation, and has been dubbed by other volunteers the ‘‘Minister of the Pigeons’’.

While his main method of eradicating poo from the station involves rushing out each day to shoo the birds off, he is also working on altering the shape of the veranda, as its supports are bent rails, which the pigeons prefer.

If that did not work, volunteer Stewart Frew also had a plan for pigeon removal.

‘‘We need them to hurry up and finish that [new] church, so that the pigeons can go back home.’’

Although Mr Frew hoped that the pigeons might make his job of painting the station redundant, as ‘‘they are already doing a good job by themselves’’.

‘‘If someone collects pigeons they are welcome to them.’’

It was not the first time the railway had had a pest problem.

Over the years it had had influxes of sparrows, but the pigeons were much bigger, resulting in larger deposits.

Volunteer Leon James is pragmatic about the problem.

‘‘At least it hoses really well.’’

While annoyed with the extra work of cleaning up after the unruly bunch, the volunteers found humour in the situation.

They had all agreed that if they were used as homing pigeons — with messages tied to their legs — they would be able to deliver the mail faster than most postal services struggling in lockdown.

Neville Walker, who has been a member of Toastmasters for some time and has had practice at giving speeches in alliterations, was eager to help with the perfect headline, ‘‘Plentiful pigeon poo puts Pleasant Point people in precarious predicament’’.

The group’s president Bryan Blanchard believed it was ‘‘like a family’’.

He was hopeful more volunteers would come forward to keep the railway going,

as the volunteers ‘‘aren’t getting any younger’’.

The main requirement was ‘‘a good sense of humour’’.

There were benefits to becoming a part of the team.

Mr Noble assured potential volunteers, ‘‘We can train you to drive, it is just a matter of learning how’’.