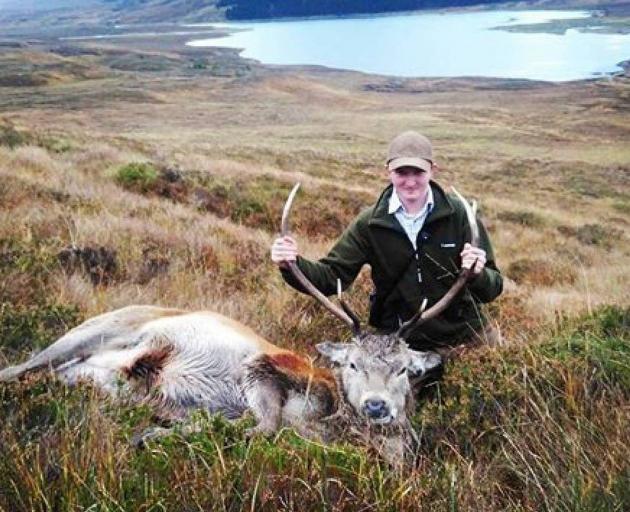 Jack Roberts was working as a trainee game keeper on his gap year in New Zealand. Photo / Supplied
A drunk English farm worker on his gap year died after ploughing a car off the edge of a country road, sending him and his passenger flying 22m through the air before crash-landing upside down in a paddock.

Emergency services found Jack Steven Roberts upside down in the driver's seat and unresponsive, his seat belt still on. He was 18 and much loved by family and friends.

Roberts' death in February 2018 was accidental but an "avoidable tragedy", Coroner Sue Johnson said in an inquest decision released today.

Police said the major causes of the crash were alcohol and excessive speed.

From the town of Stroud in Gloucestershire, England, Roberts arrived in New Zealand in 2017 and was working as a trainee gamekeeper at Craigmore Station in Maungati, a large farm in the foothills of the Southern Alps.

Roberts spent the morning of February 17, 2018, tending to animals at the farm before catching up with fellow Brit Harry Campion, who also worked at the farm.

They had a late lunch before heading to the pub for a few beers. That evening, they went to a get-together at the home of a friend's parents.

At about 8pm they drove back to the farm to check the pheasants, and had some toast at the shearers' quarters before returning to the house party.

Campion recalled Jack had some beer and two bottles of spirits with him.

At about 11pm, the parents of the party host offered to drive the two young men home because they had been drinking, but it was decided they would stay in a caravan on the property.

What happened next was a blur, Campion told police. His next memory was waking up in hospital.

It was possible Roberts wanted to charge his phone back at the farm. Campion did not remember giving his friend the keys to his Subaru, or how they decided that Roberts would drive.

But he did. The crash happened on a winding section of Pareora Gorge Rd that climbs 100m above the Pareora River.

There were no barriers on that bend, which the Canterbury Police Serious Crash Unit said would have lessened the severity of the crash even if it would not have stopped the Subaru from flying off the road.

Skid marks showed the car braked and skidded for 67m before leaving the seal, skidding a further 12m on the grass before going over the edge of a bank.

The station wagon flew between the branches of a tree and was airborne for 22m before crashing 6m down onto the paddock below, barrel-rolling before coming to a stop upside down.

A group of night hunters found the wreckage at about 2am. Campion was on the ground, knocked out but breathing.

Roberts was still strapped into the driver's seat, unresponsive. Emergency services pronounced him dead at the scene, while Campion was taken to hospital.

A post-mortem showed Roberts suffered multiple injuries to the head, both arms, the neck, chest and abdomen, and a shoulder injury from the seatbelt.

The 18-year-old had 174 micrograms of alcohol per 100ml of blood, more than three times the legal limit for drivers 20 years and older. Drivers under 20 have a zero alcohol limit.

The Subaru was going at an estimated 138kmh before braking, "too fast for it to stay on the road round the bend", the coroner said.

There have been previous crashes in the same area and Waimate District Council said it would be installing road safety barriers at the crash site.

Rural people are still dying on rural roads, the council said, "an ongoing issue that is challenging to resolve because of the set culture in the rural space".

An online tribute dedicated to Roberts said he will always be remembered by his family and friends, with donations directed to the Gamekeepers Welfare Trust.