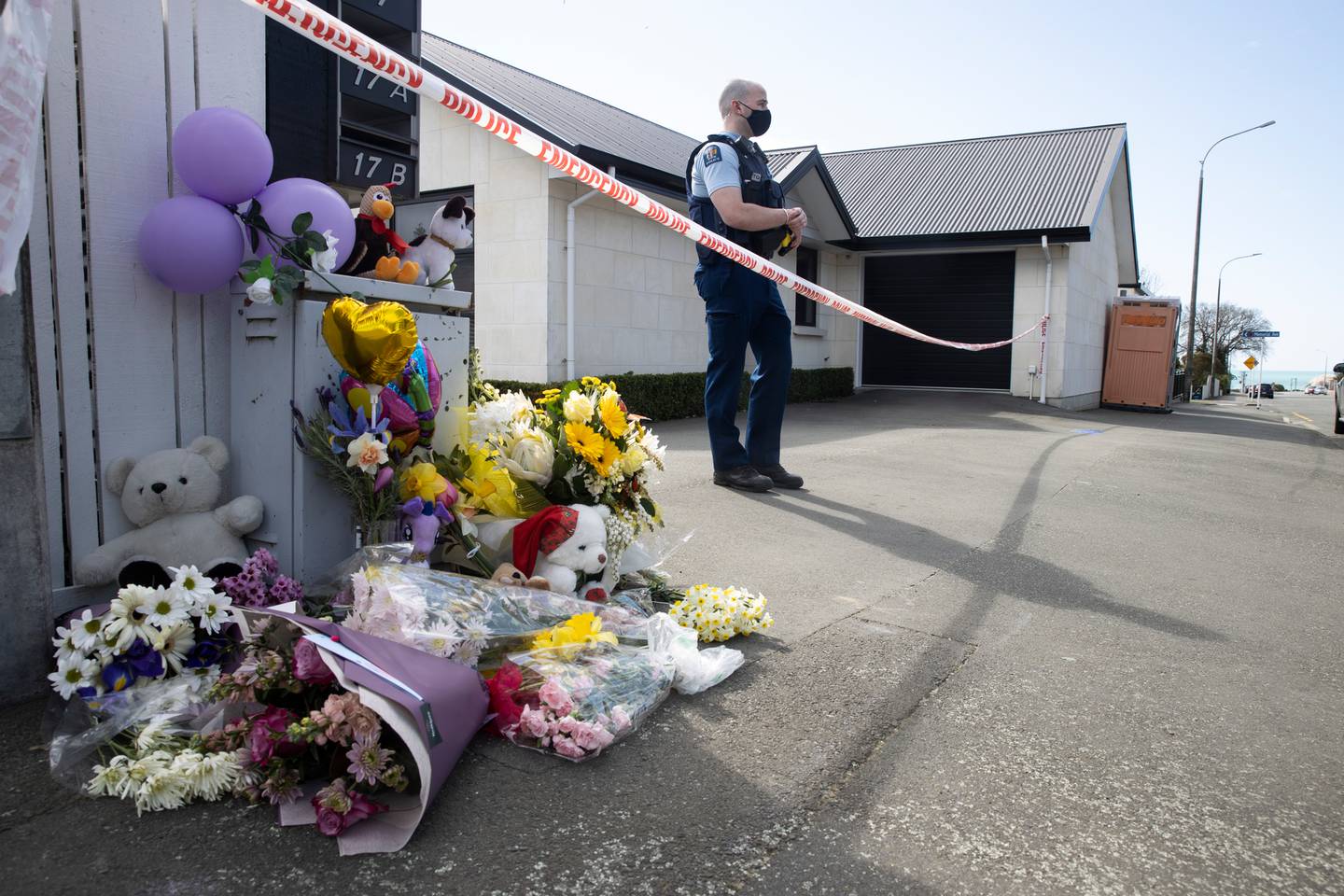 Police have finished their scene examination of the house where the little girls were killed. Photo: George Heard
A relative of the man who arrived home to find his three children dead last week - allegedly at the hands of their mother - will arrive in New Zealand today to support him.

Police have finished their scene examination of the house where the girls were killed and handed it back to their grieving father.

Graham and Lauren Dickason arrived in New Zealand last month with their daughters Liane, 6, and two-year-old twins Maya and Karla.

The South African family completed two weeks in managed isolation before travelling to Timaru where Mr Dickason, an orthopaedic surgeon, had a job with the South Canterbury District Health Board.

Just a week after they arrived in Timaru, Mrs Dickason allegedly murdered the children.

Her husband arrived home from a work function about 9.40pm on Thursday and found the grisly scene.

Police were called by a neighbour who heard Mrs Dickason distressed at the property.

She appeared in the Timaru District Court on Saturday morning charged with three counts of murder.

She was remanded to a secure forensic mental health facility in Christchurch for assessment until her next appearance in the High Court at Timaru.

The officer in charge of the investigation, Detective Inspector Scott Anderson, said an examination of the scene was completed on Saturday night and the property handed back to Mr Dickason.

"We - police and Victim Support - are continuing to support Graham through this tragic time," Anderson told The New Zealand Herald today.

"I also know the South Canterbury District Health Board are also giving him heaps of support. He has a family member arriving into New Zealand to support him today."

The Herald has contacted the Ministry of Business, Innovation and Employment - who run managed isolation - for further information on how the family member will be processed and how long Mr Dickason would have to wait to see them in person.

Det Insp Anderson said alongside the family, police were doing everything possible to support staff working on the investigation.

"Police have welfare support wrapped around all staff that have been involved in this homicide, right from the first responders through the entire investigation team.

"In particular the team at the scene have a have a very difficult job to do. Many of the police involved have children of their own which makes these sorts of inquiries challenging.

"The investigation team gets really invested in finding the truth and obtaining supporting material as to what has happened and it is only once the dust settles that we need ensure the wraparound is there and being effective."

Det Insp Anderson said the investigation was far from over.

Alongside gathering relevant information for the prosecution, the Coroner may also open an inquiry.

"Once it's gone from the front page of the paper there is a huge amount of work that continues to go on as this moves through various prosecution phases," he explained.

"From Thursday night through to Monday we had approximately 30 officers on the investigation. As of Tuesday this has been scaled back to a team of about 15."

It is understood any funeral details for the sisters are yet to be finalised.

Their bodies were removed from the scene on Friday afternoon and police formed a guard of honour as the hearse moved slowly away from the house.

The specific details of their deaths have been suppressed and cannot be reported by the Herald.

Lauren Dickason said nothing when she appeared in court on Saturday.

The accused would appear again in court on October 5.