He said he was moved to contact the Otago Daily Times when he noticed Misha and Rejah's fees for the current year totalled $140, as they were defined as ''urban'' dogs. 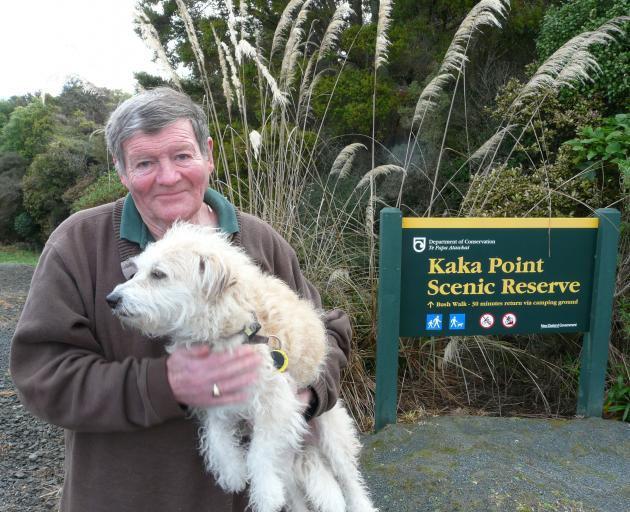 Mr Butterfield argued Kaka Point was a ''rural village'' and, as such, the town's dogs should attract a ''rural non-working'' registration fee of $50 each, or $100 total for his companions.

The pensioner's home backs on to Doc's Kaka Point Scenic Reserve, and the popular holiday township has an estimated permanent population of 100.

He said the situation was mirrored in most of the small towns across the district.

''When you think of 'urban' you think of a busy main street, wide-ranging amenities, and a population in the thousands. Kaka Point has no school, no kindy, no doctor, and we're rural delivery. Everything's rural here; you couldn't get more rural.''

He acknowledged $40 might seem insignificant to many households but said, for a single pensioner, every dollar counted.

Although it was possible for ''urban'' dog owners to pay an additional $20 fee to gain ''responsible'' accreditation from the council - thereby reducing the annual fee to $50 - Mr Butterfield demurred.

''Why should you have to pay for a discount? It just doesn't make sense.''

Council chief executive Steve Hill said the fees had been changed this year to make them ''more equitable''.

The urban/rural distinction was dictated by long-standing district planning maps, and Kaka Point's ''urban'' status pre-dated his tenure at the council.

He clarified the reasoning behind the council's ''responsible dog owner'' programme.

''The $20 fee to which Mr Butterfield refers is actually a one-off, lifetime fee, and covers council's costs in inspecting the dog owner's arrangements for properly managing their animals. Thereafter, they pay the discounted, $50 fee, which is identical to that paid for rural non-working dogs.''

''However, he said the council would take Mr Butterfield's concerns about the clarity of the fee structure on board.

''Perhaps it's something we need to revisit. We'll take a look.''