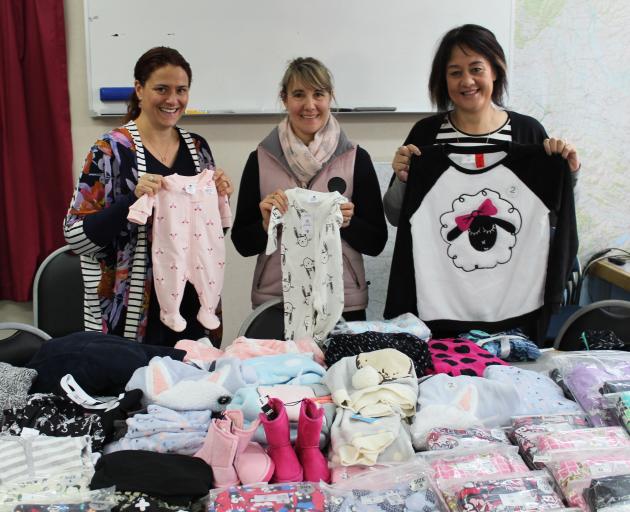 One hundred sets of pyjamas all ready to be packed up for Foster Hope Otago thanks to three generous ladies - (from left) Nicola Ryan, Kate Hurring and Emma Hutton. Photo: Ella Stokes
Three generous Balclutha women are helping foster children to have their very own brand new pair of pyjamas.

Mrs Hurring said she first thought of collecting the pyjamas after seeing the idea on social media.

From May 1 to June 30 Foster Hope Otago was running its annual 'Pyjama Drive', collecting new pyjamas for foster children.

Mrs Hurring said people around Balclutha wanted to get involved but did not have anywhere to drop donated pyjamas.

''People often don't realise that there isn't just poverty in large places, it's in small towns, too.''

Through word of mouth and social media, the group collected the large number of pyjamas at Ms Hutton's shop in Balclutha.

Mrs Ryan said through their professions they had seen first-hand how often children do not ever get to have their own pair of new pyjamas.

''We're all mums ... kids deserve to have their own new pair.

''For the cost of two coffees you can buy a kid a pair of pyjamas,'' she said.

Ms Hunt said they were very grateful for the amount of support they had received and although they lived in a small community, ''we have a big heart''.

The pyjamas will be distributed to foster children throughout Otago.