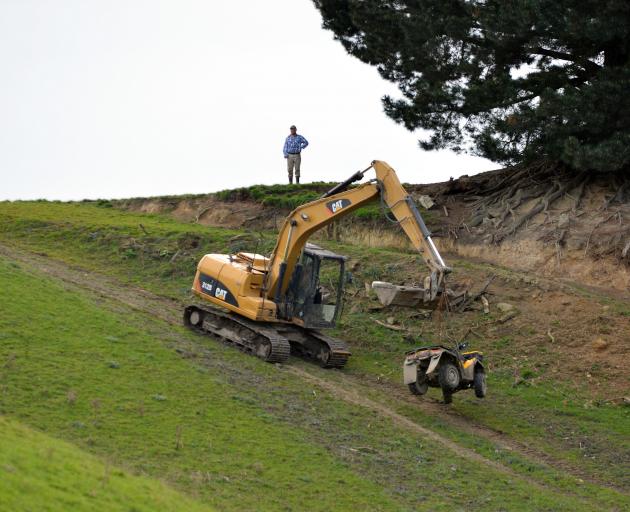 Contractors remove a quad bike from a Waihola farm in September 2014, after it was involved in an accident that killed Milton farm worker Neville Anderson. PHOTO: PETER MCINTOSH
A series of fatal quad bike roll-overs has led to a renewed call for mandatory safety standards to help prevent future deaths.

Mrs Windley also led the inquest into the death of Milton farm worker Neville Anderson, after his quad bike rolled in 2014.

In a statement, she said Mrs Blance died on May 3, 2015 when her quad bike fell from an earth-topped farm culvert into a creek bed.

Mrs Blance died of suffocation after the bike fell on top of her, trapping her in the culvert.

Her death followed that of Renee McNelis at the same farm in November 2010. She died when the spreader-trailer she was driving flipped and caused the quad bike to roll on top of her.

Mrs Windley said much more remained to be done to tackle the issue.

She proposed a cross-sector working party to consider a mandatory safety standard, as proposed in Australia.

The ACCC's recommended standards would ensure consumers are given key safety information; a minimum level of stability; and fitting of Crush Protection Devices (CPDs).

"It's frustrating New Zealanders continue to die unnecessarily while centralised efforts to improve safety lag behind other countries,'' she said.

"Companies and employers are shouldering responsibility for determining what quad bike risk mitigation looks like.

"Government agencies and industry bodies must provide leadership ... at a national level.''

WorkSafe said it was "closely following'' developments in Australia.

"Farms are complex workplaces ... It's very important farmers have the ability to make heads-up risk management decisions on their farms.''

CPDs were a "valid choice'', however.

Federated Farmers was already "actively engaged'' with WorkSafe and others on quad bike safety, and was also willing to engage with any future cross-sector working group.