Firearms handed in at Milton buyback 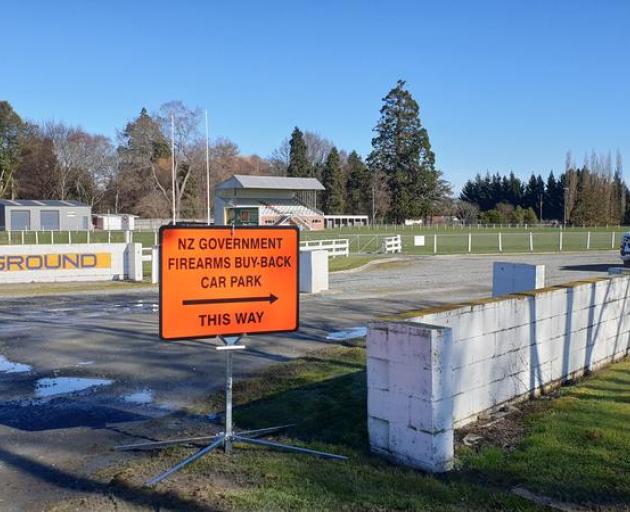 More than 75 firearms were handed in at Milton today as part of the gun buyback scheme. Photo: RNZ
More than 75 prohibited firearms and 200 accessories have been handed in at the latest buyback in Otago today.

A slow, but steady, trickle of people arrived at the Toko Rugby Club in Milton, to hand over their firearms.

The most recent tally - as of Thursday - shows $26.6 million has been given to compensate owners with 14,344 firearms and 53,696 parts handed in nationwide.

It follows news the Royal Commission of Inquiry into the Christchurch mosque shootings would extend their period of submissions to 27 September.

While residents were prepared to hand in their guns, none planned to make a submission to the commission.

An avid target shooter - who asked not to be named - said he did not have information for the commission, but did have a few firearms changes he would like to see.

"I'd like to see the police routinely armed. I mean I come from the UK, there's a high terrorist alert over there. I believe the world is changing so really this thing today, it's a good thing to get a lot of them off the street.

"It's just unfortunate that, you know, it's the legal gun holders and the responsible gun holders. They need to come back from the criminals as well," he said.

Getting rid of a semi-automatic was a no-brainer, but it was a shame for E-category licence holders who previously could own them, he said.

For one Milton resident, who asked not to be named, the amnesty was a chance to get one more gun out of the system.

He handed in an old gun that used to be his fathers, saying the firearm was collecting dust and might not be safe anymore.

But he did not think the amnesty and gun buyback would keep semi-automatics away.

"I'm quite sure that there will be a lot of guns go to ground and will appear in time to come illegally, so I just don't know what the future holds for those ones who haven't handed guns in under this amnesty.

"Going by what they say now, if anyone is caught with one, there will be serious consequences for them," he said.

Patrick from Alexandra said he had nothing to add on the commission looking into the shootings in Christchurch, but was not fully on board with the law changes.

"I can't say that I agree with the law change itself. I can see why the law was changed though. So it's been pretty upsetting, but I think the prices we've received today have been pretty fair and the help that the police have given me today has been pretty spot on. They've been quite supportive," Patrick said.

It felt like responsible gun owners were being punished for the actions of another, he said.

While the legislation seemed adequate, Patrick suggested a few tweaks.

"Where the laws are at the moment, I think are fine. Maybe if they have a look at how people are securing their firearms, would be the only thing I'd look at, and the possibility of getting people to either prove that they're trained adequately in firearms use or taking a formal training course in firearm safety," he said.

One firearm owner, who asked to remain anonymous, drove about two hours from near Cromwell to dispose of his shotgun.

He said semi-automatic guns were just not necessary.

The buyback will continue on Saturday in Owaka, Reefton, Newtown in Wellington, Taumaranui and Kawerau.

Nothing against armed police. That's the AOS. May they be in situ at a moment's notice.