Work continues to roll along on the construction of the new Beaumonth Bridge with another landmark chalked up last week.

A temporary girder was put in place on the bridge which allows access to the centre of the river.

Now the first of the steel bridge beams which will hold the bridge together have arrived.

As the rain fell hard over Otago last week, the beams left Napier, where they are being constructed, for Beaumont.

All 20 main beams are being prefabricated in Napier. Two beams a week are being transported to the site over coming weeks.

This week, another helpful progress point, the temporary trestle over the river, which will be used to build the new bridge, will be completed. 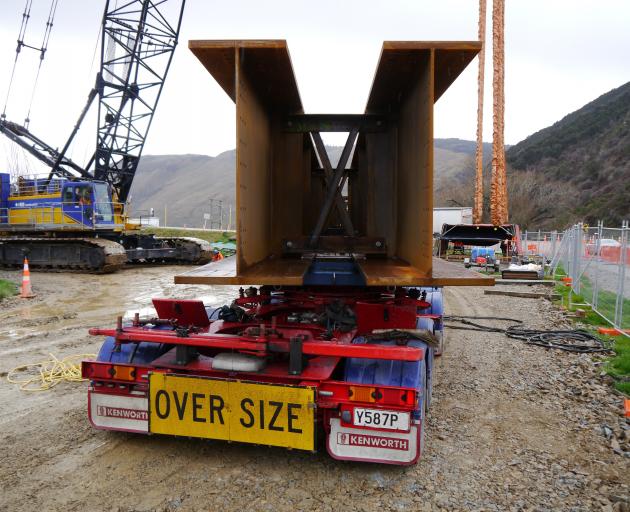 Principal project manager Waka Kotahi Colin MacKay said several different components made up the main bridge beams, which varied in size and weight, creating spans of up to 40m.

The beams will be stored on site until they are positioned on the new bridge structure from late September.

Truck drivers will pull over where possible throughout their journey but people need to build potential delays of up to 20 minutes into their travel plans, Waka Kotahi said.

The new, two-lane bridge, of a cost of $25million, will be 195m long, formed by curved steel girders, supported by four piers sitting about 12m above the average river level.

The weathering steel beams are high-strength structural steel which form a corrosion-inhibiting surface and do not require maintenance.

They will continue to "weather" where they are positioned.