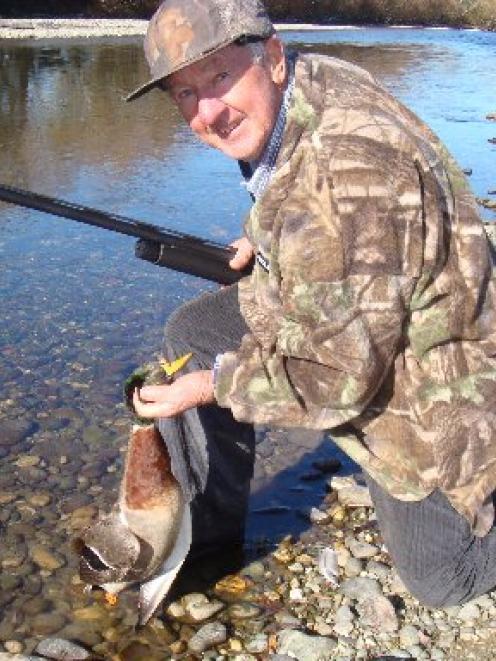 Norm Elliott, of rural Victoria, Australia, kneels by the Mataura River with one of the ducks he shot on the opening day of duck-shooting season during the weekend. Photo: Supplied.
Three Australians have crossed the ditch for a week to escape what they believe is political correctness about duckshooting in their country.
Trevor Stow, Norm Elliott and Arthur Kenney, all of rural Victoria, have come especially to Eastern Southland for a week of duckshooting.
‘‘The number of ducks around is phenomenal,'' Mr Stow said.

On the first day of the season the three shot 48 ducks, but only managed six on the second.

‘‘You even have shops with signs saying ‘duckshooters' specials','' Mr Stow said.

He said in Australia the government was under the thumb of animal-liberation groups, but in New Zealand they seemed to have less sway.

‘‘There is no anti-duckshooting lobby, such as we have in Australia, all over the news complaining,'' he said.

He said in Victoria they only had a duckshooting season for the first time in three years in 2009. They were allowed to shoot five ducks a day and the season only went for five weeks, he said.

Mr Elliott said staff at one of Gore's local supermarkets told him duckshooting season was as big as Christmas for retailers, the community and the economy in general.

He said people in Eastern Southland were very friendly and helpful and their attitudes were akin to those of outback Australia.

Mr Stow said they had been impressed with country hotels and the owners were sociable and they had had some good yarns about duckshooting.

He said he had been coming to New Zealand at least once a year for the previous 29 years and would return later in the year for some trout fishing in the region.

The three Australians will return to Victoria on Thursday.