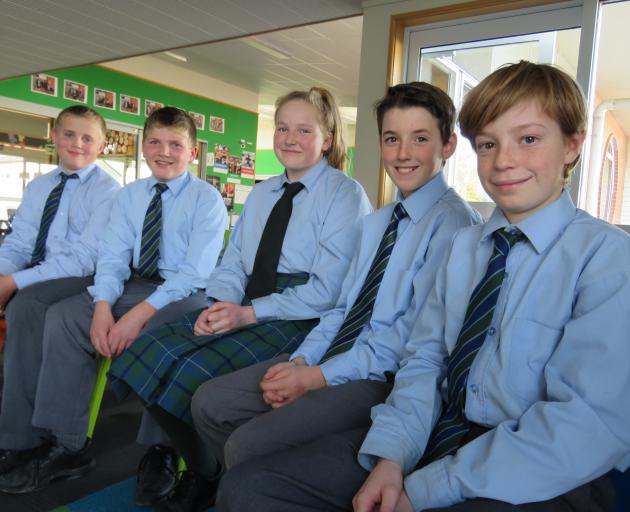 The five children who will be a part of the documentary depicting veteran Bill Roulston's stories of World War 2 are (from left) Jake Lindale (11), Charlie Ottrey (11), Madeleine Drummond (12), Dylan Young (11) and Rian Criglington (11).PHOTO: JENNY DILLNER
Five rural children and a war veteran are about to hit the big screen.

What started as a casual conversation three years ago to capture World War 2 veteran Bill Roulston's story for children in West Otago has resulted in a mini documentary.

The hour-long production is described as a game of two halves.

"During the second half, five children were picked to ask Bill questions that not only they had thought of, but all the Work children had contributed to.

"The Work programme is for the ages 8-11. These five children had completed the full three-year programme and were given the special honour of asking Bill the questions," Mrs Young said.

Hundreds of questions were asked over three afternoon sessions spent with Mr Roulston.

"There are hours and hours of uncut versions that then needed to be edited," Mrs Young said.

All five were unanimous in agreeing they were privileged to have been chosen.

Jake said he was surprised and shocked at how intense war was.

"They didn't have equipment, doctors, bandages and very little medicine for all the soldiers," he said.

Rian said he got to understand more as to how it must have felt when people did not come home.

But all five children were thrilled to be in the documentary with fame heading their way.

Mr Roulston said it was important to keep the stories alive.

"Young people can't understand what it was like, and I hope they never will.

"Retelling the stories brought back both good and bad memories," he said.

Returning to Italy a few years ago helped bring back the realisation to Mr Roulston that he had not been in the war for nothing.

"We made a difference. That helped me come to terms with it all."

After seeing the documentary recently on a projector, instigators Mrs Young and Cherie Criglington sat back and thought "Yes, we are proud to have been involved in that".

- The premiere of the documentary is to be screened at the West Otago Theatre in Tapanui on August 18 at 3pm.