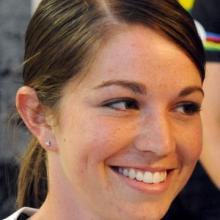 About 360 people attended the annual gala dinner to support their friends and family.

The awards, Gore District Council's flagship event, started 13 years ago and there were 46 nominees across eight categories.

Gore Mayor Tracy Hicks said, "I'm always staggered at the commitment of people in our community, many of them putting in hundreds of volunteer hours."

The Civic Award was won by Maurice Broome, who created cycle trails in Gore around the perimeter of Hamilton Park and alongside the Mataura River in Gore, resulting in greater use of those areas.

"He has been tenacious in his efforts, resourceful in getting materials and has done a huge amount of the planning and physical work himself," Mr Hicks said.

Guest speaker was Olympic medallist BMX biker Sarah Walker, who also attended a Gore BMX Club meet yesterday and will be at the Mataura Pump Track today for an event organised by Gore police, between 9.30am and 11am.

Woman of the Year: Mairi Dickson