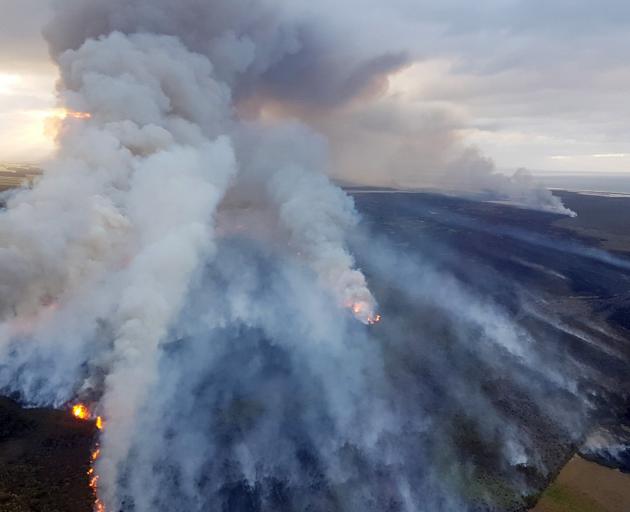 Multiple fire crews and appliances from as far as Glenorchy and six helicopters with monsoon buckets battled a 1000ha scrub blaze on DOC land at Awarua Bay near Bluff. PHOTO: FENZ
The response to a protracted wetland fire in Southland - which at its peak required nine helicopters to fight - is estimated to have cost $1.4 million.

Documents relating to the fire have been released under the Official Information Act. The exact costs of the fire are still being calculated.

Incident action plans (IAPs) show the intense conditions that firefighters faced as they tried to contain the blaze at the Awarua wetlands at its peak.

The fire in the internationally significant conservation area started on April 2.

More than 1300ha were burned, including areas of cultural and ecological significance.

The acute emergency response lasted more than a week and duck-shooters were warned to avoid the area over Anzac weekend due to fears of lingering fires burning in underground peat beds.

The IAP from the third day of the fire showed nine helicopters were used to attack the fire despite 50kmh gusts of wind.

One of the helicopters was designated for medical evacuation and the six ground crews working on the northern edge of the fire were cautioned about falling into ash pits in the densely vegetated wetlands.

Two bulldozers and a grader were used to construct fire breaks to the south, to prevent the fire spreading to the Tiwai aluminium smelter and lizard habitats ahead of a change in the direction of the wind commanders feared would happen.

The IAP from day five of the fire cautioned that power lines to the Tiwai point smelter were threatened.

Six buildings were classified as being at immediate risk and indefensible due to the large amount of vegetation surrounding them.

A public information plan was assembled as part of the IAP, which included a key message that "no houses or property is threatened".

Firefighters were also warned not to post on social media, and to assume that private messages to friends could become public.

Drones were introduced to map hotspots, although it is not certain if they flew given that wind was assessed as being a steady 50kmh, with gusts of up to 90kmh.

Concerns were flagged about issues with communication on site, along with the potential that an "unstoppable" fire run could jump the northern fire break.

The assessment on day six of the fire estimated 1369ha were burnt within a 22km perimeter, and six helicopters continued using monsoon buckets assisted by drones with thermal cameras.

A Fire and Emergency New Zealand spokeswoman said the investigation into the fire was still continuing and it was working with police to determine the cause.