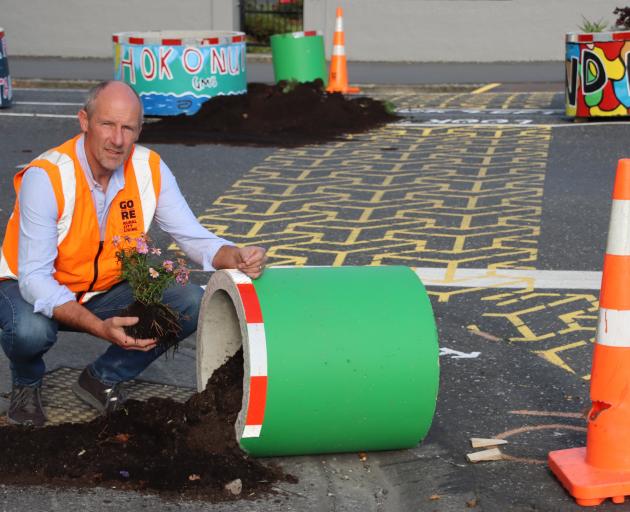 The motion was carried at a council meeting on Tuesday in which the results of a public survey were presented and a public petition was received.

"We have to listen to what people are telling us through the petition and the survey and do the right thing."

The report on the 742 survey responses results was presented by independent contractor Rebecca McElrea.

The council’s "pocket parks", which blocked or partially blocked five streets, were unpopular. A majority of 72% of 726 responses were negative, while 19% were neutral and just 10% were positive.

The new parklets and seating in Irk Street were well received by 44% of 734 respondents, while 27% were neutral and 29% did not like the changes.

The petition of 1168 signatures was presented by co-organiser Christopher Scoles.

It called for the council to open up the streets that were blocked off, and remove planter boxes which marked the courtesy crossings.

Far from making Gore’s streets safer, the changes posed a danger to traffic, cyclists and children, he said.

"It is clear that those who set up Streets Alive don’t know that Gore is known for its wide open streets."

Cr Doug Grant said that despite the strong feeling around the trial, it should run its course

"I believe we should finish it ... [there are] only six weeks to go," Cr Grant said.

Cr Bronwyn Reid had reservations about the feedback.

Unlike those who opposed the trials, people who were happy with how things were progressing did not think they needed to speak up, she said.

"The negativity becomes a big thing."