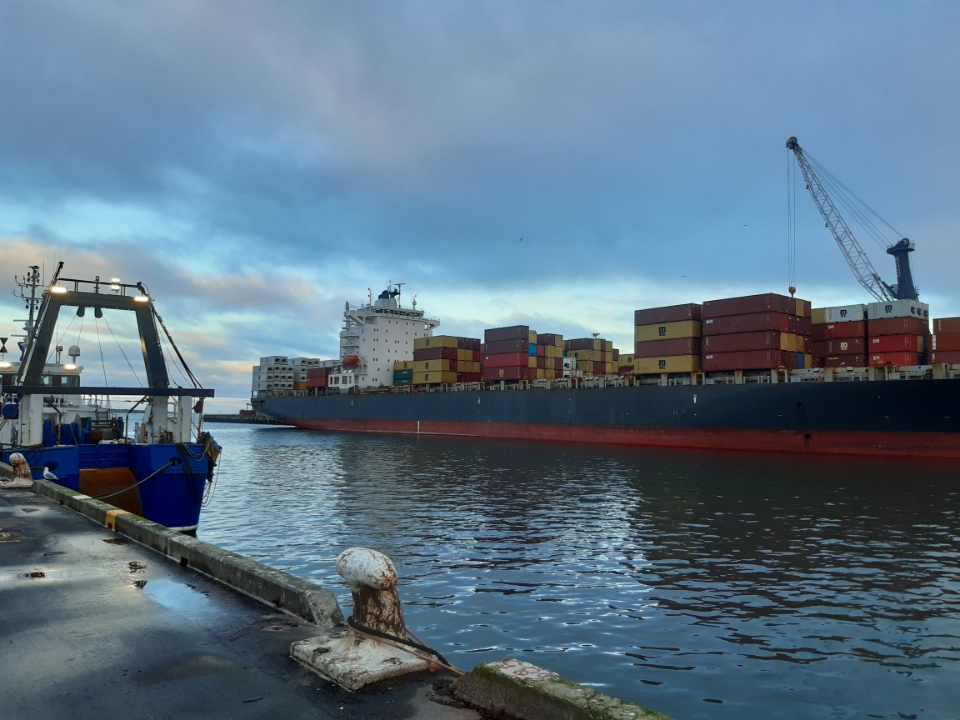 The Mattina is the third vessel in New Zealand waters to have an outbreak of the coronavirus on board. Photo: supplied
A Bluff port worker who boarded container ship on which two crew have tested positive for Covid-19 is fully vaccinated and was wearing personal protection equipment (PPE).

The Ministry of Health says the Marshall Island-flagged vessel Mattina came into the Southland port last night and all 21 crew members were tested this morning.

Rapid tests were ordered for the two cases because they were symptomatic. Health officials reported that their condition was regarded as improving. The test results for the remainder of the crew were due back tonight.

Both crew members who tested positive joined the ship in Singapore on July 2 after providing negative pre-departure tests.

Health officials at the Southern District Health Board were working with other agencies to determine the next steps for the ship.

In the meantime, the crew members remained on the Mattina. It was in quarantine in a secure area of the port inaccessible to the public and fencing would be put up to further restrict access.

South Port said in a statement today it was informed by Public Health South on Friday last week that two crew members on the ship, scheduled to arrive at Bluff, were showing flu-like symptoms and as a precaution had been isolated from the rest of those on board.

Since then, South Port had been working closely with Public Health South to manage the quarantining and testing of the vessel and crew.

The Mattina arrived in Bluff yesterday evening. A South Port pilot who has been fully vaccinated against Covid-19 boarded the ship and piloted it into the port.

Strict protocols were followed to ensure that the risk to the pilot was minimised. This included PPE and physical distancing requirements to ensure minimal interaction with the crew.

The company was continuing to work with Public Health South and the Ministry of Health to ensure the safety and wellbeing of its staff and to minimise any risk to them and the wider community.

A Ministry of Health spokesman earlier said health officials were working to determine whether a harbour pilot, who guided the Mattina into port last night, was on the ship and if so, how long they spent on board and if there was any contact with crew members. No one else had been on or off the ship since it docked.

Bluff Community Board chairman Ray Fife said the positive cases were a concern, but it was in the hands of the Ministry of Health.

He had heard concerns within the last year from community members about what testing overseas sailors received before coming ashore.

The ship had been awaiting the results of Covid-19 tests before any mixing of crew and port workers could occur, he said.

"The right procedures were followed, and we'll just wait and see what [the ministry is] going to do now."

Maritime Union of New Zealand national secretary Craig Harrison said tonight that union members wouldn't be going anywhere near the Mattina until it was cleared by health authorities.

Stringent protocols would also need to be put in place for dock workers, and there should be a call for volunteers to work with the ship, he said.

The union had a concern that a ship with Covid-19 had arrived at a local port, but was confident workers had been following  correct procedures.

"We haven't had Covid come across the border at the port yet, so they're doing all the right things."

The onus should be on shipping companies to vaccinate their sailors, Mr Harrison said.

"The amount of money these global operators are making, [the cost of vaccinations] would be a drop in the bucket."

The Mattina is the third vessel in New Zealand waters to have an outbreak of coronavirus on board.

Sixteen crew members on deep-sea fishing vessel Viking Bay tested positive for Covid-19 earlier this month and have been transferred to a managed isolation and quarantine (MIQ) facility in Wellington, the Ministry of Health said.

Fishing ship Playa Zahara had 16 positive cases among its 18 crew members and was in a quarantine berth at Lyttelton Port not accessible to the public. Thirteen crew members had been taken to an MIQ facility in Christchurch.