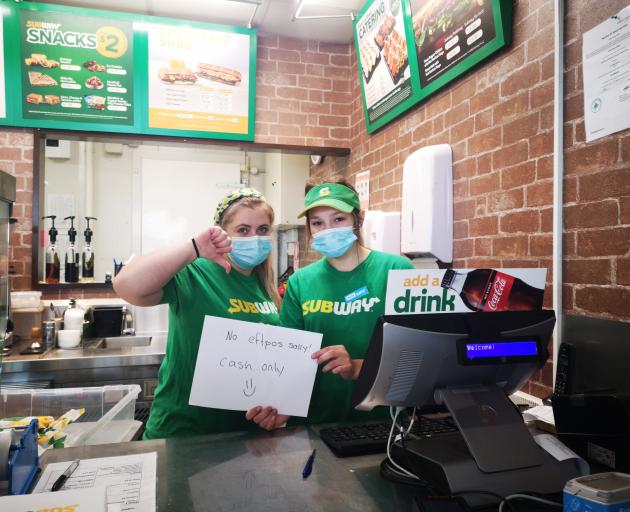 Working a quiet shift at Gore Subway are acting assistant managers Chanelle Byron (left) and Aisha Ogilvy when their eftpos and Wi-Fi were down yesterday. PHOTO: MICHAEL CURREEN
An internet and phone outage which disrupted more than 1500 connections in and around Gore caused disruptions for businesses but also brought out the town’s community spirit.

A digger in the Edendale area, south of Gore, cut a cable about 1pm on Wednesday, causing the outage.

It caused a fibre broadband outage in Gore and surrounding areas, affecting about 1700 connections.

The damage was caused by contractors cutting through a fibre cable while installing a water pipe to the dairy factory in Edendale.

The close proximity of electrical cables meant care had to be taken while excavating the damaged fibre cable ahead of starting to resplice the fibres.

Chorus apologised for the inconvenience and service was reconnected by 4.30pm yesterday.

Cafe Ambience owner Janice Paterson said manual eftpos was still functional at her Gore business during the outage, though services such as Paywave and Apple Pay had not been available.

"We don’t have any Wi-Fi and a couple of cards have declined. We’ve had some lovely customers that have offered to pay for ones in trouble," she said.

It really showed the friendliness of Southlanders, she said.

Gore Subway acting assistant manager Aisha Ogilvy said their eftpos was completely down and they were only able to take cash payments.

"We’ve had some grumpy customers about not having eftpos ... but we can’t do much about that.

"A lot of customers just go to the ATM to get cash out."

Not all businesses and homes were affected.

Gore District Council communications manager Sonia Gerken said the outage had occurred at an inconvenient time for the council.

"It’s the end of the financial year for us and not having our systems working at full capacity is challenging," she said yesterday.

"It’s had a major impact on our operations but fortunately this morning our IT team has managed to get connectivity for us with 4G routers."

That restored the council’s phones, which had been down since Wednesday.

Council facilities such as the Gore refuse station and the visitor centre were without eftpos and could only accept cash during the outage.

People were also unable to use the council’s online forms, Ms Gerken said.

The council had not had any complaints, she said.

"I think everybody appreciates we’re all in the same boat."