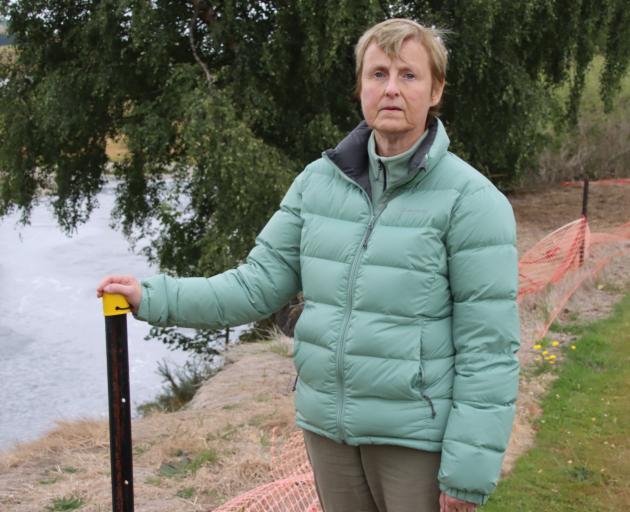 The area of river bank is beside Mataura’s River St and is near the Mataura RSA and the former town hall, which is used by a play group and the Mataura Youth Centre Trust.

After the February 2020 flood, Gore District Council staff put up fluro safety netting and warning tape on the edge of the bank which was eroded during the flooding.

It is about an 8m drop down to the river.

Two years later, the netting has fallen down in places and is starting to rot.

Cr Phillips raised the question at the town’s community board meeting on Tuesday during a discussion about shingle build-up in the river.

He had spoken earlier about floodbank work being completed near the town.

For many years the flow of the river had been "greatly compromised by the volume of gravel" opposite the eroded river bank which was why the erosion had occurred, Cr Phillips said.

"If someone falls in the Mataura River at River St whose responsibility is it?

"Is it mine as councillor because I failed to protect the residents of Mataura or is it the Gore District Council itself?"

Gore District Council roading manager Peter Standring said the problem with the river bank was a 3m scarp that started at the top of the bank.

The scarp needed to be removed to make it safer, he said.

If any weight was put on the netting it would not be an adequate barrier, Mrs Soper said.

"There is nothing up there to stop a small child or anybody slipping and falling when it gets wet."

Gore District Council parks and recreation manager Keith McRobie said the council appreciated residents' concerns about the bank's stability in River St and the fact the main flow of the river was cutting into it.

"Our staff have also raised this issue with Environment Southland, which is the landowner."

Council staff put up fencing in two areas where vegetation was washed away after the February 2020 flood, he said.

The flooding left what staff believed to be "an unstable and sheer bank".

"This fencing was only meant to be temporary until Environment Southland came up with a permanent solution."

The erosion had affected the upper half of the bank which was the section of the river reached infrequently during large floods.

"Catchment operations staff are working on options to reduce the risk of further erosion.”

Meanwhile, councils can prosecute owners of swimming pools that can have more than 40cm of water and not fenced to the requirements of the Building (Pools) Amendment Act 2016.
The epitome of hypocrisy.