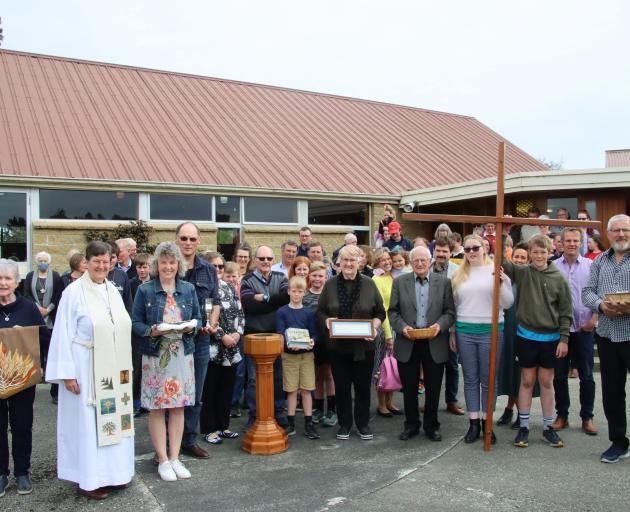 Lumsden Balfour Presbyterian Church members gather outside the Balfour church at the end of a service to decommission the building on Sunday. PHOTO: SANDY EGGLESTON
An era came to an end in Balfour on Sunday as the church doors were closed by congregation members for the last time.

A service to decommission the building, which was part of the Balfour Lumsden Presbyterian Parish, was attended by about 100 past and present congregation members and Southern Presbytery moderator Anne Thomson and presided over by minister the Rev Mike Kirkby-Sing.

The building has been sold and possession date was September 29.

Mr Kirby-Sing said the work of the church would continue despite there being no church building in the town.

“While it’s sad to say goodbye to a place, we’re not saying goodbye to being a church family and to sharing our faith in the community,” he said.

The church had already sold the building in Lumsden where the Northern Southland Community Resource Centre was and had decided to sell other properties, including the church building and two sections beside it.

The plan was to build a modern facility in Lumsden on the site of the present building.

Lumsden was the best location for congregation members to meet, he said.

The original building on the site was built in 1902.

The present building had been opened in 1973.

Church elder Jonny Elder said it made sense to consolidate the church’s assets to build a modern facility.

“We’re a small church and we aren’t utilising any [of the buildings] very well and none of them are that functional .”

Selling the church’s assets was not a “sad story”.

“It’s a story about progress and trying to keep moving forward before we get so far behind we can’t catch up again.”

It was hoped the new building could be used by other groups in the community.

“Lumsden is lacking in a good modern facility.”

It was not known when the church would have enough money to build the new facility.