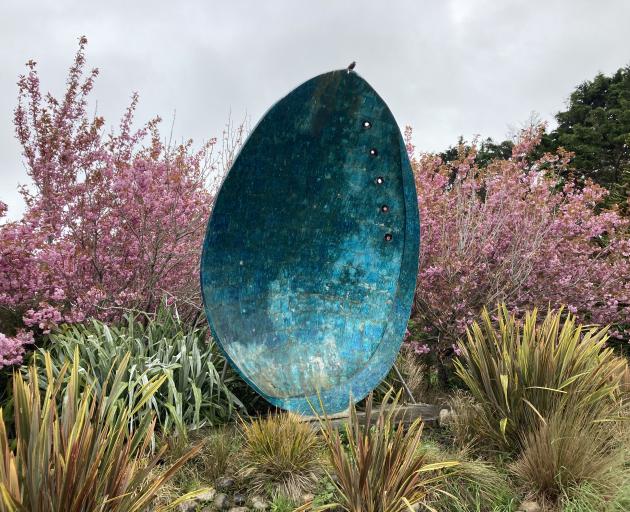 Riverton’s giant pāua shell has sat on the side of State Highway 99 since the early 1990s. Photo: Matthew Rosenberg
A giant pāua shell that is the pride of a small Southland town was destined for Trade Me before a concerned member of the community stepped in and saved the day.

Now it is staying where it belongs — in the seaside town it was created.

The Riverton pāua shell, which is lined with 1000 sheets of real pāua, sits on the side of State Highway 99 at the town’s entrance.

In 1998, it featured in a series of postage stamps celebrating New Zealand’s town icons.

What many people do not realise is the shell actually belongs to Fiordland Souvenirs, a family-owned manufacturer of pāua shell products located directly behind the structure.

The shell was built by the family in the early 1990s to advertise the business, and became the town’s unofficial icon thereafter.

But the business has sold the land the shell sits on, so it’s up for sale.

When Carole Elder heard her boss was putting it on the chopping block, she was dismayed it could end up in the wrong city, and tipped off the Ōraka-Aparima Community Board.

"He sold the two sections where the pāua shell sits. So he wasn’t sure what he was going to do," Elder said.

Riverton is a coastal town in Southland, home to about 1400 people. Photo: ODT file
"That's when I went to the community board and said 'you've got to save our shell'.

"They didn’t realise it could end up anywhere in New Zealand."

The two parties have all but reached a deal, and the board is set to fork out up to $45,000 to secure the shell and relocate it to a new home.

Chairman Graeme Stuart said the board was just waiting on some outside funding to be confirmed before they could close the deal.

However, there is disagreement in the town about where the shell should go.

The community board plan to move it one street back from the state highway to Bath Rd, which is not a thoroughfare for the town of 1400.

Stuart said the board had heard from people who felt the giant pāua should remain on the main street, but still felt the revamped Bath Rd site was a better fit for the installation.

"This is still situated at the middle of the business area, back one street off the main street. It will be well signposted," he said.

"We’ve got picnic tables set up, we'll have landscaping. Businesses [are] developing there. There’ll be a cafe."

Elder was not convinced, though.

She said the shell should be moved about 50m along the road to a council-owned section that also had parking next to it.

Failing that, the space outside the museum — also on the main street — was a logical destination, she believed.

However, Stuart did not back the museum idea, saying the location had been looked at, but other "bits and pieces" used it throughout the year.

"The RSA put crosses on it. We felt that that was going to clutter the area."

That included purchase, refurbishment, transport, and set-up, he said.