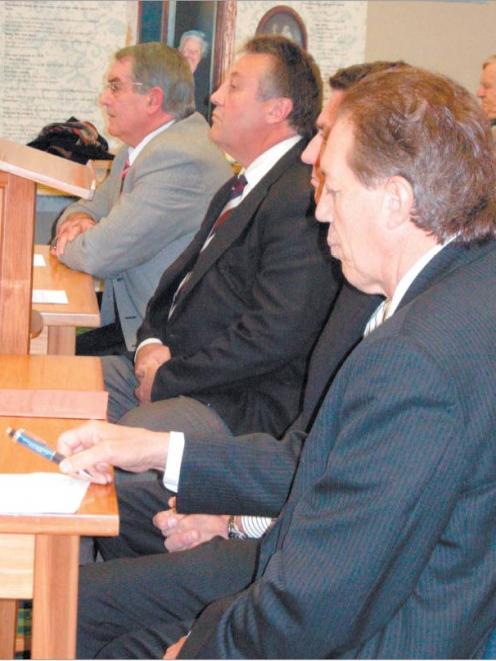 Invercargill Mayor Tim Shadbolt (front), Rugby Southland chief executive Roger Clark (obscured), Invercargill Deputy Mayor Neil Boniface (third from front) and Invercargill City Council CEO Richard King ask Gore District Council to reconsider fronting up with some of the funding for the Rugby World Cup.
The big guns of Invercargill City Council, including Mayor Tim Shadbolt, gave an impassioned plea complete with scenic video in an effort to persuade Gore District Council to reconsider its decision not to financially back the hosting of two Rugby World Cup matches to be played in Invercargill.

The plea was made at the Gore District Council's LTCCP submissions hearing on Tuesday.

The council had previously decided to turn down the request to contribute $13,687, which would have been its share of the $350,000 required. The Invercargill City Council share had been set at $97,766 and Southland District Council's share $29,330.

Other community funders including the Invercargill Licensing Trust and the Mataura Licensing Trust had also been included in the funding formula presented to Gore District Council.

Invercargill is to host two Rugby World Cup games in 2011 - Scotland on September 10 and Argentina on September 15 - and there is a possibility of hosting a home union team or the equivalent.

Invercargill City Council representative Roger Clark said it was important to maximise the potential to capture the economic benefits the region could be in store for.

The Rugby World Cup would be the third largest global sporting event and it was estimated 60,000 people would visit New Zealand during the hosting of the cup, Mr Clark said.

While it had not been calculated how many of that number would come to Southland, the region stood to reap huge benefits economically, he said.

It was estimated the economic benefits for New Zealand as a whole could be as much as $5 billion.

Invercargill City Council's submission stated the council was not contributing to the event for the purpose of holding rugby matches in Invercargill.

Invercargill's representatives said the contribution was because of the economic benefits that would accrue to the whole region.

Invercargill Deputy Mayor Neil Boniface said the funding venture was all about partnerships as the whole region would benefit.

"We would like you on board to reap the benefits of the Rugby World Cup. The potential is huge," Mr Boniface said.

Mr Shadbolt said while he acknowledged there were ratepayers going through ‘‘tough times'', the region needed to progress.

"We have to progress as a region and the only way we are going to progress is if we work together," Mr Shadbolt said.

Invercargill City Council suggested in its submission in order for Gore District Council to minimise the impact on rates, the cost of $13,687 could be spread over the next three years at $4667 per year, and levied on the business community where most of the benefits would lie.